The year 2022 has been very successful for experienced actors such as Brad Pitt, Leonardo DiCaprio, and Tom Cruise.

by Om Prakash Kaushal
Reading Time: 10 mins read
A A
0 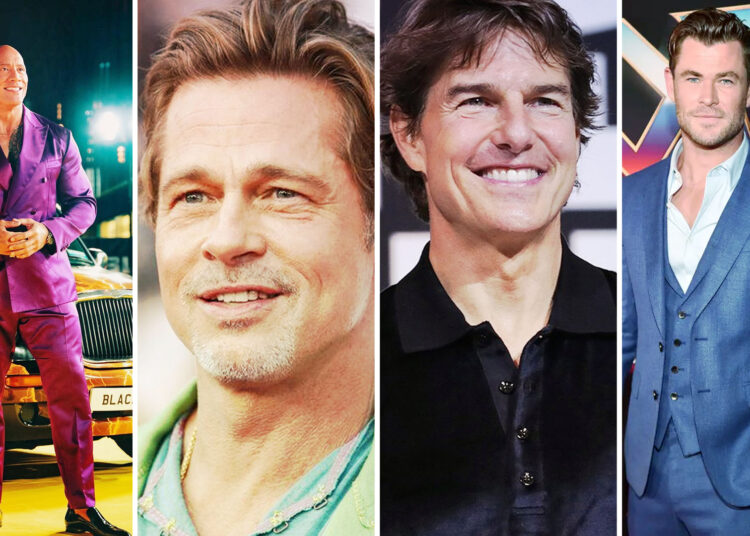 Are you looking for highest paid actors of 2022? Well, the year 2022 was a great year for Hollywood. The majority of films earned well at the box office, and many franchises made good money with their follow-up films.

As a result, it was a successful year for actors as well. The year 2022 has been very successful for experienced actors such as Brad Pitt, Leonardo DiCaprio, and Tom Cruise. Here is a list of the top 8 actors who earned the most money in 2022 as the year came to an end.

The highest-paid actors of 2022 are listed below. Have a look at each of them individually

Tom Cruise became the highest-paid actor in the world after earning $100 million for his role in Top Gun: Maverick. Cruise, whose real name is Thomas Cruise Mapother IV, is a famous actor and producer from the United States.

In addition to being nominated for three Academy Awards and being recognized as one of the highest-paid actors in the world, he has garnered a number of awards and honors, including an Honorary Palme d’Or, and three Golden Globe Awards.

He is one of the highest-earning movie actors of all time, with over $4 billion in North America and over $11.1 billion worldwide in box office earnings for his films.

The multi-hyphenated star went from being a tough wrestler to becoming one of Hollywood’s highest-paid actors. He received a sizable US$22.5 million pay for his debut superhero role as Black Adam from DC Comics, placing him among the top-paid actors of 2022.

He is one of the world’s top-paid actors, and his films are among the top paid. Rock received the highest salary of $5.5 million for his part in the film The Scorpion King, earning him a spot in the Guinness Book of World Records (2002).

Fans of the action mega-franchise Fast and Furious will be happy to learn that there will be an additional installment (the 11th), with Vin Diesel earning US$20 million for his returned part.

Over the course of his long acting career, Vin Diesel (real name Mark Sinclair) has amassed enormous recognition and income, making him one of the highest-paid actors in the world today.

He now owns the production firm One Race Films in addition to being a well-known actor.

Leonardo DiCaprio is renowned for his diverse professional background and flexible acting style. Leonardo’s performance has received significant praise from the general audience in addition to various honors and awards.

He is one of the well-known Hollywood actors and has appeared on the list of the highest-paid actors in the world eight times.

His upcoming film, Killers of the Flower Moon, which starred Robert De Niro and was written by Martin Scorsese, earned him US$30 million. The historical drama is based on the Osage tribe killings of the 1920s, which is noteworthy for being the FBI’s first significant homicide case.

Although Will Ferrell is best known for his comedic roles, the 55-year-old Californian has amassed a sizeable net worth, as evidenced by his US$20 million Spirited salary.

Aside from acting, John William Ferrell is also a producer and a comedian. He made his name as a cast member on the NBC sketch comedy program Saturday Night Live in the mid-1990s, where he appeared from 1995 until 2002.

A lot of fans and critics questioned whether 54-year-old Smith’s film career would ever be the same after he made headlines earlier this year for publicly slapping Chris Rock at the Oscars.

According to the BBC, his most recent film, Emancipation, generally earned favorable reviews and might be his return ticket to Hollywood. He received $35 million for his part in the movie, ranking him as the second highest-paid actor of 2022.

William Bradley Pitt is widely considered one of the most powerful and influential figures in the American entertainment industry. He is regarded as one of the top performers in Hollywood and is also one of the most successful actors.

Over the course of his extensive career in the industry, Pitt’s income stream has remained consistently high. Following his work on Bullet Train, the actor, and producer, who is now 58 years old, has secured an exclusive negotiation for the sum of $30 million for his next project.

According to Deadline, Pitt will portray an experienced Formula One driver in a fictional film produced by Apple Studios.

Chris Hemsworth, now 39 years old, was considered a promising young actor when he initially joined the Marvel family to portray the role of Thor.

However, in the following ten years, the actor has seen a meteoric rise in his income. The handsome Australian actor received US$20 million from Netflix for his Extraction 2 movie, making him one of the highest-paid actors in 2022.

He is now one of the most adored actors in the entertainment business thanks to the great attention and recognition his acting and physique have received.