Sci-fi is one of the most well-liked film genres, with millions of fans coming to cinemas or streaming platforms each year to watch these films

by Om Prakash Kaushal
Reading Time: 12 mins read
A A
0 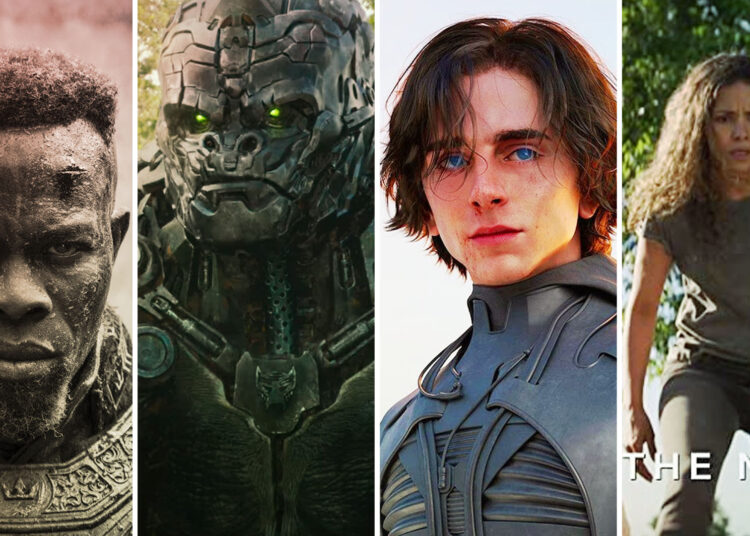 If you want to start your New Year with science fiction movies, here we’re with the Top 10 Science Fiction Movies to Watch In 2023.

Sci-fi is one of the most well-liked film genres, with millions of fans coming to cinemas or streaming platforms each year to watch these films. The popularity of movies like Nope, The Adam Project, and Everything Everywhere At Once made 2022 a successful year for this genre.

There is no indication that this pace will slow down any time soon, as 2023 will get off to a roaring start, with both original films and theatrical titles making their way to streaming services in the very near future. So, if you are a fan of science fiction movies, then you should watch these films in 2023.

The list of top 10 science fiction movies to watch in 2023 is listed below:

This forthcoming science fiction movie is one of the most anticipated movies that are scheduled to be released in the year 2023. The second part of Denis Villeneuve‘s two-part adaptation of Frank Herbert’s 1965 novel Dune acts as a direct sequel to the 2021 movie and is titled Dune: Part 2.

After Paul Atreides gets control and leads a revolt against Emperor Shaddam IV, the story picks up where Dune left off in the film. The sequel, which is being eagerly awaited by fans, is expected to be released in theatres until November 3, 2023.

2. Transformers: Rise of the Beasts

The forthcoming science fiction action film Transformers: Rise of the Beasts is based on the Transformers toy line and draws significantly from the Beast Wars mythology. It is the eighth live-action Transformers film and the follow-up to Bumblebee from last year.

The plot of the film will follow Optimus Prime as he tries to build a link with the planet in 1994 in Brooklyn, New York City. The movie is scheduled to be made available to the public in the United States on June 9th, 2023.

Zack Snyder‘s epic space opera, Rebel Moon, which was inspired by the works of Akira Kurosawa and the Star Wars franchise, is scheduled to be released by Netflix at some time during the year 2023; however, the streaming service has not yet determined when exactly the project will be made available.

Viewers should anticipate a pretty crazy experience because Rebel Moon was first marketed as a more mature ending to the Star Wars prequels.

The Mothership is an upcoming sci-fi thriller adventure film that was written and directed by Matthew Charman.

In the film, Sara Morse will be followed by events that take place one year after her husband disappeared from the remote property they shared.

Following her discovery of an odd, extraterrestrial object beneath their home, Sara and her children are forced to go on a quest to find their husband, father, and—most importantly—the truth. Without a specific date, the film is slated to be available on Netflix in 2023.

5. The Hunger Games: The Ballad of Songbirds and Snakes

The upcoming dystopian action-adventure film The Hunger Games: The Ballad of Songbirds and Snakes is based on the Suzanne Collins 2020 novel of the same name, which serves as both a prologue and a sequel to The Hunger Games trilogy.

The movie will follow a teenage Coriolanus Snow as he trains a tribute for the 10th Hunger Games, a competition that clears the way for his dictatorial reign. Snow will ultimately become the president of Panem. On November 17, 2023, it is scheduled to premiere in theatres.

The 2017 novel Spaceman of Bohemia by Jaroslav Kalfa serves as the basis for the upcoming science fiction drama film Spaceman, which is directed by Johan Renck.

The film tells the story of Jakub Procházka, who overcame all difficulties to become the country’s first astronaut.

He was brought up by his grandparents in the Czech countryside after being deserted as a small child. There has not been an official announcement made regarding the release date of the film in 2023.

The Pod Generation is an impending sci-fi romantic comedy film that will be directed by Sophie Barthes. The plot of the film will take place in the not-too-distant future, at a time when artificial intelligence (AI) is all the rage and nature is slipping into obscurity.

The couple from New York, Rachel, and Alvy, who are ready to start a family with the aid of new technology developed by tech firm Pegasus, is the story’s protagonists. The movie is expected to be released sometime in 2023.

The upcoming science fiction horror movie M3GAN was created from a script by Cooper and James Wan and is directed by Gerard Johnstone.

The movie will center on Gemma, a toy manufacturer’s employee who finds herself abruptly appointed as the niece of her deceased parents while simultaneously designing the robotic doll M3GAN.

Josh Gordon and Will Speck are directing the new sci-fi comedy picture Distant, which is about an asteroid miner and takes place in the distant future.

The miner must make his way to the other survivor after crash-landing on a strange planet and navigating the dangerous terrain while running out of oxygen and dodging strange animals.

65 is a forthcoming science fiction film written by Scott Beck and Bryan Woods. The film is produced by Sam Raimi.

The main character of the movie is an astronaut who crash-lands in a strange place and quickly finds out that he is not alone.

In spite of the fact that the film is scheduled to be released on March 10, 2023, there has been no new information regarding the production as of now.