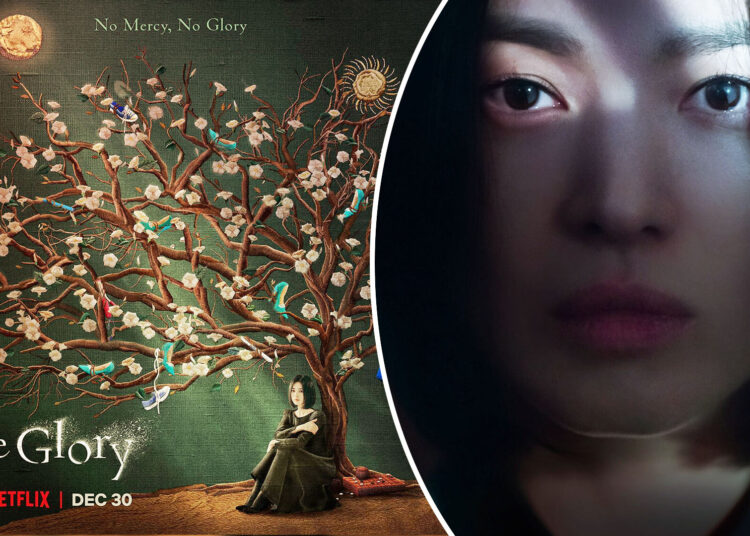 Song Hye Kyo is coming with a new drama titled “The Glory.” On December 1, Netflix Korea updated the release date along with a teaser poster of the drama on their Instagram.

Song Hye Kyo too on her Instagram shared the poster as well as the motion picture. In the poster, one can see the actress Song Hye Kyo sitting under a beautiful embroidery tree. The expression on her face drags everyone’s attention toward it.

Song Hye Kyo Confirms the Release Date of Her Upcoming Drama The Glory.

The striking image of Dong Eun (Song Hye Kyo) sitting by herself beneath a gorgeously embroidered tree was made public. The embroidered flowers, trees, and other items appear to indicate the significance of the vengeance that Dong Eun has diligently planned for a very long time.

The drama centers on a high school student who envisioned becoming an architect someday. She was a victim of peer-inflicted violence in high school. Due to bullying, she left high school. She then made plans for getting back at both her tormentors and the onlookers who did nothing.

The woman, a former victim of bullying at school, now teaches her tormentor’s child’s homeroom. Her vicious revenge plan gets serious. The television series is written by Kim Eun-sook and directed by Ahn Gil-ho. The drama “The Glory” will be released on Netflix on December 30.

Song Hye-kyo was placed sixth in 2018 and seventh in 2017 on Forbes magazine’s list of Korea’s Power Celebrities. Along with Kim Tae-hee and Jun Ji-hyun, she is considered to be one of “The Troika,” collectively known as “Tae-Hye-Ji.” The popularity of Song’s television dramas abroad made her a prominent Hallyu celebrity.

Song gave the Korean Red Cross 100 million won in March 2022 to aid those affected by the enormous wildfire that started in Uljin, Gyeongbuk and expanded to Samcheok, Gangwon.