by Deepak Jediya
Reading Time: 4 mins read
A A
0 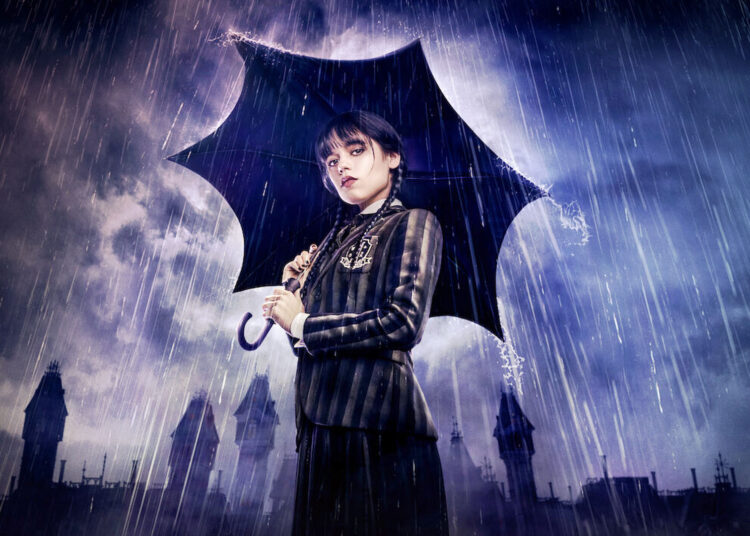 The eldest daughter of pop culture’s spookiest family will be the subject of a Netflix original movie titled Wednesday, which will debut during Thanksgiving weekend.

The new version of The Addams Family focuses on Wednesday Addams, who finds herself in the middle of a murder mystery investigation after being sent away to boarding school at the mysterious Nevermore Academy.

The new version of The Addams Family is directed and executive produced by Tim Burton, the beloved director who specializes in creepy but entertaining reimaginings of classic characters. The title role in the horror comedy will be played by Jenna Ortega (You).

It is true to the comics that Wednesday has never been depicted by a Latina actress before. The series is described as a detective-driven, supernaturally infused mystery that follows Wednesday Addams’ time as a student at Nevermore Academy.

Yes, Netflix has now released a full-length trailer for the next film, which opens with Wednesday being dubbed a freak by the water polo team at Nancy Reagan High School (complete with the late former First Lady’s statue).

However, she quickly launches a piranha attack in the pool! Her parents Morticia and Gomez send her to the Nevermore Academy when she is expelled.

Jenna Ortega appeared in the official teaser trailer for the first time as Wednesday Addams. We see the famous Addams child as well as Thing, a living severed hand who serves as the family’s loyal buddy.

You can watch the teaser below.

The first episode of Wednesday on Netflix will release on November 23, so you can start binge-watching the entire season in less than two months.

Also Read: Never Have I Ever Season 4 New Cast Members and All you need to know

Cast Of The “Wednesday” Production

As the titular Wednesday Addams, Jenna Ortega, well known for her roles in Jane the Virgin, The Fallout, Scream (2022), and the Netflix series You, leads the cast.

Other well-known actors portray Morticia Addams in The Mask of Zorro, Gomez Addams in Narcos, and Larissa Weems in Game of Thrones, played by Catherine Zeta-Jones and Gwendoline Christie, respectively.

While there has been some debate at first over the casting, particularly in relation to Luis Guzmán’s Gomez, the majority of fans are strongly in favor and complimenting the characters’ fidelity to the original cartoon source material.

While the characters outside of the Addams family are still fresh to the plot, the rest of the family is represented by Pugsley Addams and Lurch, respectively, played by Isaac Ordonez and George Burcea. This includes:

Georgie Farmer in the role of Ajax Petropolus

Riki Lindhome in the role of Dr. Valerie Kinbott

Emma Myers in the role of Enid Sinclair

Thora Birch in the role of Tamara Novak

Hunter Doohan in the role of Tyler Galpin

Jamie McShane in the role of Sheriff Donovan Galpin

Christina Ricci, who played Wednesday Addams in the 1991 classic, has been recruited in the project as “a series regular,” but the specifics of her role have not yet been revealed.

The Plot of the series.

The Wednesday episode of Netflix explores the titular character’s time as a student at the Nevermore Academy in the little town of Jericho, where she has both friends and foes! She must manage brand-new, complicated relationships, master her developing psychic gift, and stop a horrific murdering spree that has scared the neighborhood school.

As if that weren’t enough, Wednesday also had to solve the eerie case her parents became entangled in 25 years ago.