The first trailer for the eagerly anticipated sequel Enola Holmes 2 has just been released, and it will soon be available on Netflix. 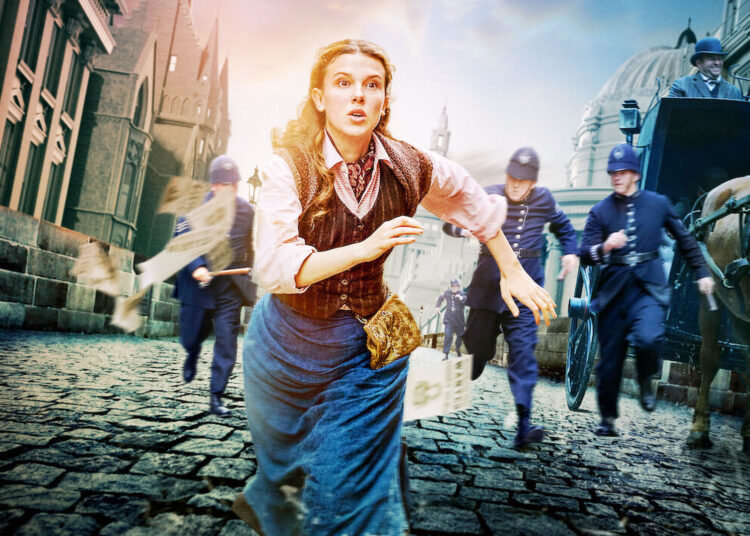 In the second part of the Enola Holmes series, which is scheduled to premiere on Netflix in November 2022, both Millie Bobby Brown and Henry Cavill will reprise their respective roles. The following post is a rundown of everything that we now know with regard to Enola Holmes 2:

The first movie in the series was directed by Harry Bradbeer. And was made available on Netflix in September 2020 after it had been anticipated that it would initially be shown in theatres. The epidemic was the impetus behind Warner Brothers selling the rights to the film to Netflix, and the rest, as they say, is history.

It has been reported that 76 million households have watched Enola Holmes within the first 28 days of its availability on Netflix, which places the film in the sixth position for most watched in the English language.

The film not only shot to the top of the top 10 charts but remained in the US top 10 for 20 days. But it also performed well internationally.

As a result, the first trailer for the eagerly anticipated sequel Enola Holmes 2 has just been released. And it will soon be available on Netflix. Here is all the information you need to know about Enola Holmes 2.

Enola Holmes 2 will premiere on Friday, November 4, 2022, according to Netflix’s social media confirmations.

Although there has been a slight delay since the first movie’s September release, at least we can now count down the days. Cavill revealed that he had finished his final day on set in late November 2021, after the sequel had begun filming. By January 2022, it was revealed by Netflix that filming for the second season of Enola Holmes had come to an end.

The following is a list of the main cast members who will appear in Enola Holmes 2:

1. Millie Bobby Brown will portray the role of Enola Holmes

2. Henry Cavill will portray the role of Sherlock Holmes

3. Sam Claflin will portray the role of Mycroft Holmes

4. Helena Bonham Carter will portray the role of Eudoria Holmes

5. Louis Partridge will portray the role of Tewkesbury

6. Burn Gorman will portray the role of Linthorn

7. Adeel Akhtar will portray the role of Lestrade

8. Susie Wokoma will portray the role of Edith

9. Hattie Morahan will portray the role of Lady Tewkesbury

10. David Bamber will portray the role of Sir Whimbrel Tewkesbury

11. Frances de la Tour will portray the role of The Dowager

12. Claire Rushbrook will portray the role of Mrs. Lane

13. Fiona Shaw will portray the role of Miss Harrison

14. Ellie Haddington will portray the role of Miss Gregory

Plotline Details of the Movie

Netflix hasn’t said what Enola would be doing in Enola Holmes 2, but the books by Nancy Springer, on which the movies are based, give us a good idea.

According to the official plot summary for the Netflix film, a private investigator, just like her famous brother, Enola Holmes, goes on her first official case to discover a missing girl. Simultaneously, the sparks of a hazardous conspiracy ignite a mystery that requires the assistance of friends — and Sherlock himself — to unravel.

We are anticipating that the second film will be adapted from The Case of the Left-Handed Lady, which is the second novel in the book series written by Nancy Springer. In the novel, Enola is involved in yet another investigation into a missing individual. Enola takes all required steps to locate Lady Cecily Alistair this time because she has missing. Since the books are so brief, Netflix might decide to combine a few mysteries into the upcoming film.

Enola Holmes 2’s initial trailer was revealed at Netflix’s TUDUM event in September 2022. It hinted at the upcoming mystery Enola will solve involving a missing girl and a case that has been “vexing” Sherlock, which will bring the Holmes siblings together.

Netflix had already published a brief behind-the-scenes video of Louis Partridge wrapping his scenes for the movie before the Enola Holmes 2 trailer was made public. You can watch the trailer again below if you missed it:

More About The Film Enola Holmes

Enola Holmes, in its first weekend streaming on Netflix, was the service’s second most watched item after the television series Ratched. The film was the most watched on Netflix in its first five days. And it went on to have the biggest first-day opening of any Netflix release in 2020.

It also had the highest share of all Netflix-monitored nations. The movie was the seventh-most-searched movie on Google in the entire world in 2020. With 78 million watchers, the movie came in at number seven on Business Insider’s list of the biggest Netflix original movies ever.