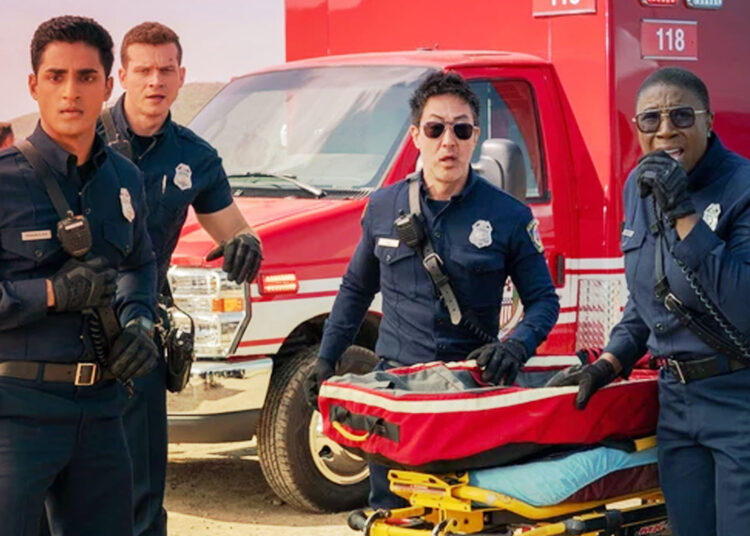 After 5 successful seasons, 9-1-1 is all geared up for its Season 6, hope all the unanswered questions will be answered in season 6.

The procedural action-drama series “9-1-1” follows the hectic lives of Los Angeles’ first rescuers, including firefighters, police officers, paramedics, and dispatchers. These professionals are placed in some of the most perilous, upsetting, and life-threatening circumstances.

And they must simultaneously cope with their personal problems and save the affected and defenseless people. The program debuted for the first time on FOX on January 3, 2018, and was created by the team of Ryan Murphy, Brad Falchuk, and Tim Minear.

The show shows how first responders deal with various crises, some of which can be extremely intense but are also inspiring at the same time. It draws its inspiration from real-life incidents. The procedural drama has earned a lot of love and admiration from viewers and critics alike over the course of its five seasons.

If you are interested in the journey of these responders, you might be curious about what the potential sixth season has in store for people. If that is the case, then please allow us to share with you all of the information that we have obtained.

Also Read: he Voice Season 22: Is It Coming In August? Click To Know

Using the previous season as a template, 9-1-1 season 6 will most likely consist of 18 episodes, with a mid-season hiatus lasting from December 2022 through March 2023.

The program will continue to release every Monday at 8 p.m. ET/PT on Fox. Beginning in the summer of 2023, episodes will also be made available on Disney+ and Hulu the day after they air.

It’s possible that the vast majority of the core cast will return for the next season in the same roles. This means the cast members we will see in action are mentioned below.

There is a possibility that additional cast members who play essential roles will be back for the sixth season of the show. This comprises

Michael Grant’s character, Rockmond Dunbar, is not anticipated to make a comeback after leaving the program. Since Claudette passes away and Jonah gets arrested, it’s possible that Vanessa Williams and Bryce Durfee won’t appear in season 6. On the other hand, we can’t say for certain that there won’t be any new casts joining the action at any point in the plot. If that takes place, the cast lineup might include a few new faces.

The Station 118 team is requested to assist several groups of people in peril throughout season 5. However, they still need to handle their personal problems and make crucial choices. Eddie even abandons Station 118 and faces his traumatic history for Christopher’s sake.

Maddie considers going back to work after taking a long sabbatical in the season finale. However, May must choose whether she wants to leave her dispatcher job and go back to her higher education. At the same time, Buck and Taylor’s relationship are impacted by Lucy’s presence.

The action of the next sixth season will most likely pick up following the conclusion of the fifth season. Members of the 118 may be called upon to deal with yet another set of potentially fatal circumstances and save the lives of numerous defenseless individuals. Additionally, Maddie is probably going to return to the field after a break. Additionally, we might witness the continuation of Eddie and May’s story.

It is likely that you will watch the show on Fox on Monday evenings at 8:00 p.m. Eastern Time when it returns on September 19th. No need to worry if you don’t have a TV.

You can watch on a laptop by going to the Fox website or on a mobile device by downloading the Fox app. Just be sure to keep the login information for your cable TV provider handy for quick access.

There are alternatives if you don’t have cable. Through streaming services like YouTube TV, Hulu + Live TV, and fuboTV, you may watch. If you haven’t used the platforms previously, you may join up for free seven-day trials to explore what they’re all about. After that, you might think about committing to a monthly plan.