Must Watch series on Hulu in September 2022

Best series on Hulu to stream this September which cannot be missed. 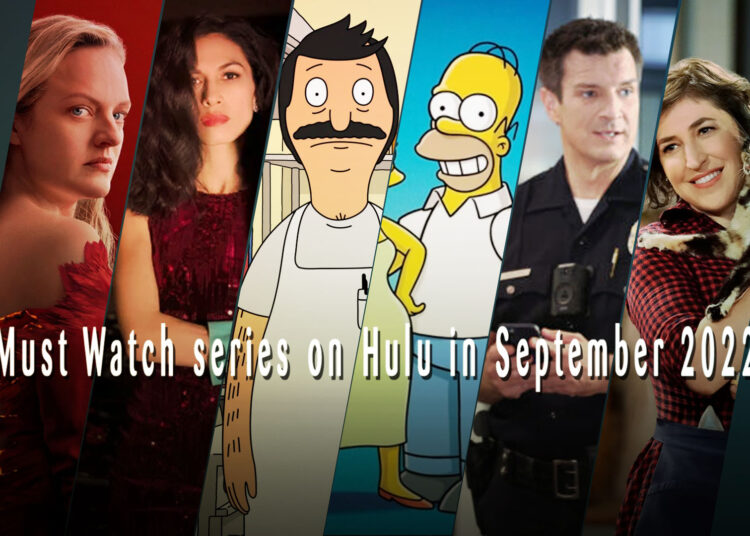 The streaming service Hulu has been active to launch a plethora of films and tv series for us to watch since 2007.

The majority of this service is owned by The Walt Disney Company and the minority by NBCUniversal. Besides projects from Freeform, ABC, and FX Networks Hulu also offers its own in-house series and films as Hulu original programming.

As a result, a number of popular and acclaimed tv series of today can be streamed on Hulu which include shows like ‘Mrs. America, ‘Fargo’, ‘The Handmaid’s Tale, ‘Little Fires Everywhere, etc.

This year also we have found many important series distributed by Hulu. This article has listed the must-watch series streaming on the site in September.

Also Read: Must Watch Series In September 2022 on Netflix

The setting of the Hulu original series is a Second American Civil War-affected society governed by a theonomic totalitarian society in which fertile women are subjected to child-bearing slavery and termed as “Handmaids”.

The upcoming American musical drama series ‘Monarch’ is set to premiere on Hulu on September 11, 2022. Fox Entertainment has produced this series which is a multigenerational musical series about Romans.

The plot of the series centers around Dottie Roman and Albie Roman, the heads of the family who have created together a country music dynasty. Trace Adkins and Susan Sarandon portray Albie and Dottie respectively in the series.

The popular procedural tv series ‘9-1-1’ is created by Ryan Murphy that revolves around the police officers, firefighters, paramedics, firefighters, and other first responders of Los Angeles along with their private and professional lives.

Miranda Kwok has developed this American crime drama series that is adapted from ‘La chica que limpia’, the Argentinian series of 2017.

The plot revolves around a medical doctor Thony De La Rosa whose five years old son Luca is suffering from a fatal medical disorder and who has to take the job of cleaning lady after witnessing a crime. Season 2 of the series will be streamed on Hulu on September 19, 2022.

ABC’s period sitcom ‘The Goldbergs’ is set in the alternative version of Jenkintown of Pennsylvania in the 1980s and is told from a preadolescent and later a teenager’s perspective.

The story is inspired by creator Adam F. Goldberg’s childhood memories. Season 10 of the series was announced on April 19, 2022, and is set to release on September 21 on Hulu.

ABC’s tv sitcom ‘The Conners’ which is created by Matt Williams centers on a working-class family named the Conners struggling to live on a humble household income.

The popular animated tv series ‘Bob’s Burgers is a sitcom that deals with the Belcher family consisting of mother Linda and father Bob along with their children Tina, Gene, and Louise.

The family owns a hamburger restaurant which is responsible for the title of the series. This long-running series will return on Hulu with its season 13 on September 26, 2022.

Another popular animated sitcom coming in September on Hulu is ‘The Simpsons’. The much-renowned series is about the Simpson family living in the fictional town of Springfield called Middle America.

American police procedural tv series ‘The Rookie’ that Alexi Hawley created for ABC is inspired by the real-life experience of William Norcross, a Los Angeles Police Department officer who joined the Los Angeles police department in his mid-40s after moving there in 2015.

Season 5 of the series will premiere on September 25, 2022, and will be streamed on Hulu the next day.

Based on Miranda Hart’s British sitcom ‘Miranda’, ‘The Big Bang Theory famed Mayim Bialik’s sitcom ‘Call Me Kat’ is about a single woman of the age of thirty-nine years who is struggling against her mother along with society to establish her belief that it is possible to be happy without having everything wished for.

The title of the series is derived gr the cat café that Kat opened with the money set aside for her wedding by her parents. The series can be streamed on September 29, 2022, on Hulu.