Quinta Brunson is a well-known name in the American entertainment industry, having worked as a writer, comedian, actress, and social media star. 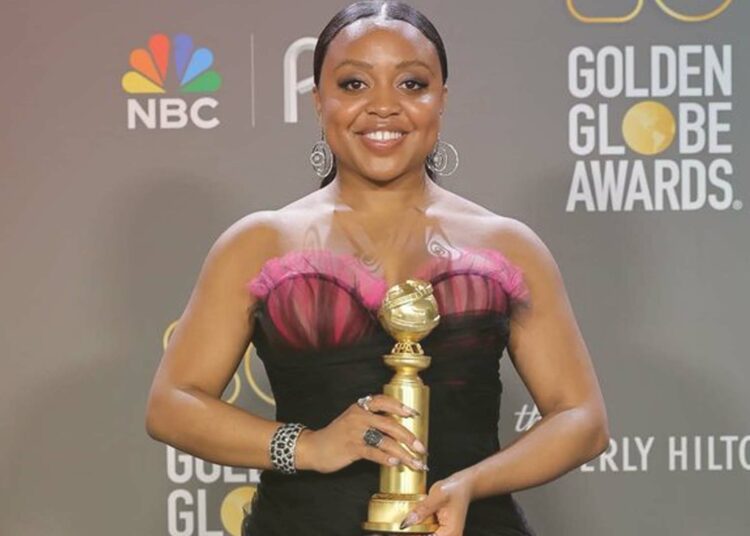 Are you curious to know about Quinta Brunson, who recently won the Golden Globe for best actress award for Abbott Elementary? If yes, then this article is for you, as here we will discuss everything related to Quinta Brunson and her winning Golden Globe.

But, before discussing this, we will know in a nutshell about Quinta Brunson. Well, Quinta Brunson is a well-known name in the American entertainment industry, having worked as a writer, comedian, actress, and social media star.

She is probably most recognized for her video series on Instagram titled “The Girl Who’s Never Been on a Nice Date.” Quinta Brunson began her professional life as a social media content producer before obtaining a position at “BuzzFeed Motion Pictures.”

She is currently touring the United States as a stand-up comedian and creating comedy shows for mainstream media outlets. Brunson is the owner of a YouTube channel that has a subscriber of more than lakhs.

She is also well-known on other kinds of social media, including Facebook, Twitter, and Instagram, amongst others. She was listed in Forbes’ “30 Under 30” list for 2017 as well. To know more about Quinta Brunson and her winning of a Golden Globe, read this article till the end.

Quinta Brunson, the queen of comedy, won the Golden Globe for her leading role in “Abbott Elementary” in the category of best performance by an actress in a television series, musical, or comedy. Brunson won an award and was nominated for one at the Golden Globes ceremony on Tuesday night, according to the US news source Variety.

Since Tracee Ellis Ross’s triumph for Black-ish in 2016, Brunson is the first Black woman to take home the trophy in this category. Along with the nomination for the program’s Best Television Series – Musical or Comedy, Brunson is also listed as a producer.

With six nominations, including one for outstanding comedy series and nominations for the same four actresses, “Abbott Elementary” caused a sensation at the 2022 Emmy Awards. Brunson was awarded the prize for best comedy writer for the pilot episode, and Ralph was given the prize for best supporting actress in a comedy.

In addition, the show’s casting director, Wendy O’Brien, was honored with a Creative Arts Emmy Award for outstanding casting in a comedy.

Selena Gomez (‘Only Murders in the Building‘), Kaley Cuoco (‘The Flight Attendant‘), Jenna Ortega (‘Wednesday‘), and Jean Smart (‘Hacks’) were also nominated, but Brunson prevailed over them all.

Janine Teagues, who is the second-grade teacher at Willard R. Abbott Elementary School, is portrayed by Brunson, who brings out her positive attitude in every scene. The second season of the uplifting comedy series began airing on September 21, and the most recent episode of the series broadcast on Wednesday.

Quinta Brunson was born in Philadelphia, Pennsylvania, in the United States of America, on December 21, 1989. She grew up in Philadelphia along with her siblings. Brunson adored watching comedies as a child. She became interested in comedy as well, and she decided early on that she wanted to be an actress.

Quinta Brunson became a student at the illustrious “Temple University,” where she was a cast member in the comedy production known as “Temple Smash.” She left the university, however, in order to pursue her acting career.

After that, she became a member of ‘The Second City’ in Chicago, where she attended and graduated from comprehensive improv comedy training.

Quinta Brunson has a soft spot for animals. In reality, adoption is a possibility for every animal that appeared in her “Up for Adoption” series. She enjoys rock climbing because she finds it to be a pleasant hobby that keeps her in shape.

One of her favorite sites in the entire globe is “Universal Studios Hollywood,” therefore she enjoys visiting there as well. Brunson is a skilled dancer. In many of her videos, she has demonstrated her dance abilities. She resides in Los Angeles, California, at the moment.

About The Show Abbott Elementary

The show’s first season received seven Primetime Emmy nominations and three wins when it debuted as a midseason entry in the 2021–2022 television season on December 7, 2021.

The show received a second season renewal in March 2022 for 22 episodes, and it debuted on September 21, 2022. The show’s third season was ordered in January 2023. Currently, you may watch the first season on Disney+’s Star content hub.