Selena Gomez Went With Valentino At The Red Carpet Of Golden Globes 2023!

Selena Gomez was looking beautiful as ever while attending the red carpet with sister Gracie! 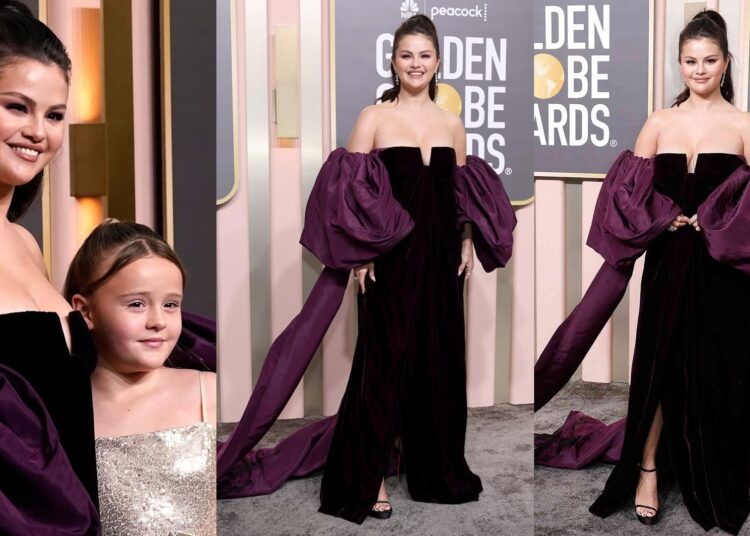 Selena Gomez appeared on the red carpet of Golden Globes 2023 with her adorable sister Gracie. Nowadays celebrities never leave a chance to promote their kids or their siblings.

Whether it is related to taking them to any party or at any event they try to do all these with the love. And if we talk about making the red carpet appearance with their siblings are kids then it has become one of the common affairs in Hollywood.

Something like this recently happened on the carpet of Golden Globes 2023 when Selena Gomez decided to bring her 9-year-old sister Gracie.

The 30-year-old singer has chosen the closest people to be her date and that is heard, little sister. They both posed together on the red carpet of the event while flaunting amazing dresses.

Coming to the dress then Selena Gomez was wearing a Valentino dress in dark purple and black. She was wearing the dress properly and matching it with amazing makeup.

Here you can check out some pictures of Selena Gomez from The Red Carpet Of Golden Globes 2023!

The dress was off the shoulder and had eggplant sleeves she accessorized it with earrings. Her hair was pulled back in a ponytail as the actress was smiling at the camera. Coming to her 9-year-old sister then she was also looking beautiful in her dress.

Gracie was wearing a silver dress and carrying a golden purse. They both smiled and showed their amazing bond on the red carpet.

Coming to Selena Gomez then she was there at the event as the actress grabbed the nomination for Best Performance by an Actress in a Television Series. The nomination was because of her series called Only Murderers in the Building.

It is not the first time that we are seeing both sisters sharing an amazing bond. It was recently when Selena Gomez and her sister came together to celebrate the 28 birthday of Nicola Peltz.

Selena and Nicola are amazing friends and that’s the reason why they decided to spend the new year and the early birthday celebration together with Gracie.