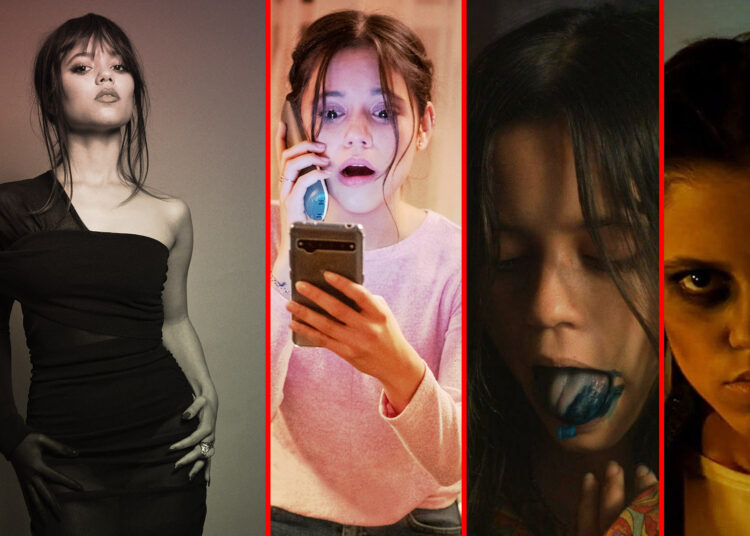 The face of Jenna Ortega in two tight braids, two bunch of bangs covering the forehead, a white collar, and a very creepy penetrating look is nowadays all over the entertainment world.

The first season of the coming-of-age supernatural comedy horror series based on the character of Wednesday Addams of The Addams Family has only premiered on November 23 of this year and the series has already become very popular with Netflix viewers.

American actress Jenna Ortega who has portrayed Wednesday in the series started her acting career as a child actress. She gained the most prominence after playing the young version of the titular character in The CW’s comedy-drama series ‘Jane the Virgin‘.

Other than starring in these television series, Ortega has also been cast in a number of films. With time her roles became more significant in those.

Following is the list of films in which Ortega has starred.

James Wan directed this supernatural horror movie that is a sequel to the first installment of the Insidious franchise- ‘Insidious’ which was released in 2010. Ortega played the minor role of Annie in the film.

The plot follows Josh Lambert and his family as they move to the old house of his mother only to come across strange paranormal activities. Patrick Wilson portrayed Josh Lambert in the film. It was released on September 13, 2013.

This is the second film adaptation of Hal Roach’s short film series ‘Our Gang’ which succeeded in the 1994 adaptation titled as ‘The Little Rascals’. It serves as a re-interpretation of the original stories.

Ortega played the role of Mary Ann in the movie. It was released on April 1, 2014.

This American movie is directed and produced by Juan Feldman. The plot revolves around a woman suffering from a midlife crisis and meeting a younger man in Costa Rica which promises the possibility of new adventure and romance.

With Marcia Gay Harden, Huguette Urhausen, Ron Canada, and Óscar Jaenada in the major roles Ortega played the minor role of Anna in the film. It was released on August 21, 2015.

McG directed this black comedy horror movie that is the sequel to McG’s 2017 movie ‘The Babysitter‘. The plot continues the life of Cole Johnson after two years of the incidents that happened in the first film.

Judah Lewis reprised this role in the second film too. Ortega played Cole’s best friend Phoebe Atwell. The movie was released on September 10, 2020, on Netflix.

Yes Day is Miguel Arteta’s family comedy movie that is adapted from the same named children’s book by Amy Krouse Rosenthal. Ortega played the role of one of the Torres kids Katie Torres in the movie.

Megan Park directed this film that follows a high school student dealing with emotional trauma after a school shooting. Ortega played the protagonist Vada Cavell in the movie. It was released on January 27, 2022, in the United States.

Scream is Tyler Gillett and Matt Bettinelli-Olpin’s slasher movie that marks the fifth installment of the Scream movie series. Though the movie was advertised as the film series’ relaunch to which the title also contributed, the plot is actually a direct sequel to the 2011 movie ‘Scream 4’.

This also marks the first movie or series that Wes Craven did not direct. The setting is twenty-five years before the Woodsboro murders as another Ghostface emerges to target a teen group, all of the members of which are related to the original murders.

Ortega played a teenager named Tara Carpenter in the film. It was released on January 14, 2022.

BJ McDonnell has directed this horror comedy movie that is adapted from the story of Dave Grohl.

The plot revolves around the Foo Fighters moving to a cursed mansion for recording a new album. Ortega played Skye Willow in the movie. It was released on February 25, 2022, in the United States.

Ti West has directed this slasher film that features a cast and crew in the plot who gather on a rural Texas property of an elder couple in order to make a p*rnographic movie.

But there they find a threatening unlikely killer casting all of their lives in danger. Ortega portrayed Lorraine Day in the movie. It was released on March 18, 2022.

Scream 6 is an upcoming slasher movie whose title is yet not confirmed. It marks the sixth installment of the same-named franchise and a direct sequel of the 2022 movie.

Ortega will be seen reprising her role as Tara Carpenter in the film. It will be released on March 10, 2023.