Angelina Jolie Had a Perfect Night Out With Daughter Vivienne

Angelina Jolie Had a Perfect Night Out With Daughter Vivienne, Goes to See 'Dear Evan Hansen' in Philly! 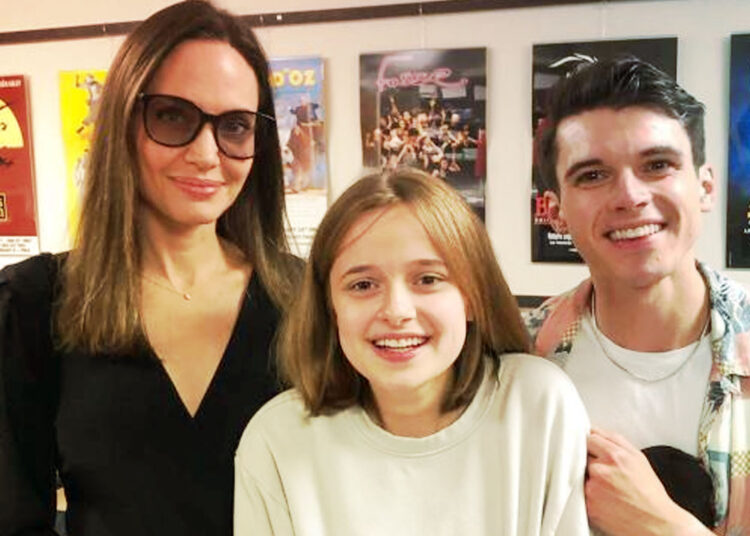 Angelina Jolie was in Philadelphia this weekend, and she took her daughter Vivienne to attend the national tour of Dear Evan Hansen!

Angelina Jolie and her 14-year-old daughter Vivienne Jolie-Pitt enjoyed the perfect mother-daughter night out over the weekend. The two saw Dear Evan Hansen at the Forrest Theatre in Philadelphia, Pennsylvania, and had the opportunity to meet members of the cast backstage.

The Oscar winner and her 14-year-old daughter paid a backstage visit to the cast after the performance on Saturday (August 20) at the Forrest Theatre in Philadelphia, Pennsylvania.

According to People, the mother-daughter team watched the play in Los Angeles recently and “liked the show so much” that they traveled to Philadelphia “simply to see it again.”

Angelina and Vivienne posed for pictures with Anthony Norman, who is presently the tour’s leader as Evan. He appears to have given her the cast that he wears on the show!

Here you can check out some pictures from Angelina Jolie and Daughter Vivienne’s Night Out.

The 47-year-old actress  Angelina Jolie looked stunning in a long, black gown and sunglasses, while the kid was all grinning in a light-colored sweater and dark leggings. According to IMDb, the musical is about “a high school senior with Social Anxiety Disorder and his journey of self-discovery and acceptance following the death of a fellow classmate.”

“They were wonderful and kind,” the insider said, “and they raved about [actor] Anthony Norman’s portrayal as Evan.”

Angelina Jolie was previously seen in Los Angeles with her son Knox.

Angelina Jolie has a daughter named Vivienne with her ex-husband, Brad Pitt. Maddox, 21, Pax, 18, Zahara, 17, Shiloh, 16, and Knox, 14, are also their children. Pitt is now overseas promoting his new picture, Bullet Train, while Jolie and Vivienne were attending a Broadway show. Pitt welcomed fans during a movie event in Kyoto, Japan, on Tuesday.

Jolie’s one-on-one time with Vivienne comes after a hectic summer for the family, which included Maddox’s 21st birthday earlier this month and the transition of Zahara to Spelman College in Atlanta, Georgia.

Pitt is also excited for Zahara and her collegiate experience. “She’s quite intelligent. She will thrive even more at college “According to Vanity Fair, he told reporters on the red carpet earlier this month. “It’s an exciting and lovely moment for her to forge her own path and follow her passions. I’m overjoyed.”