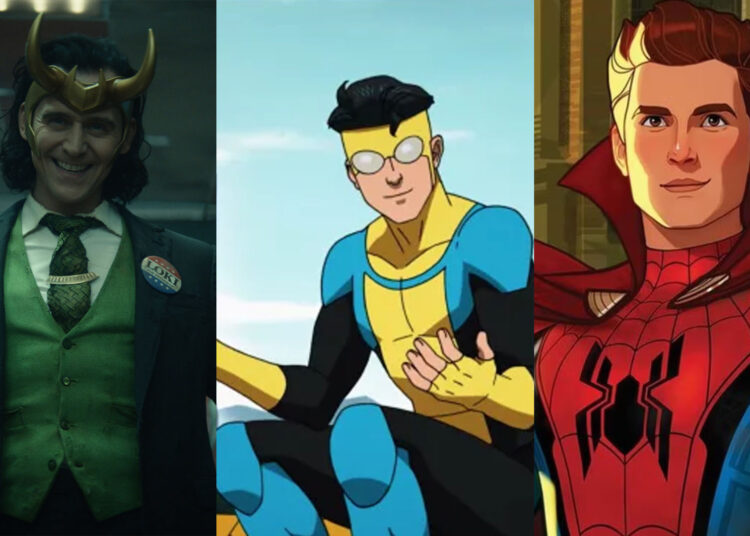 Have you watched The Boys? Then you would definitely like these Top 5 Superhero Television Series we have listed for you to watch in 2023.

The year 2023 is going to be a “super” with a plethora of much-awaited superhero movies coming out.

But movies are not the only visual entertainment that adapts stories from comic and manga series.

Here is the list of the Top 5 Superhero Television Series of 2023:

Michael Waldron created this American television series based on the titular same named character of Marvel Comics. The series serves as the third tv series of MCU which will share continuity with the plot of the franchise’s other films.

The plot of this series surrounds an alternate version of the God of Mischief and is set after the incidents of the 2019 movie ‘Avengers: Endgame‘.

It presents Loki being brought to a mysterious bureaucratic organization existing outside time and space to monitor timelines, known as Time Variance Authority after he steals the Tesseract.

While facing the choice between being erased for being time-variant and helping to stop a greater threat, Loki finds himself traveling through time.

Viewers waited for the arrival of the fan-favorite Loki’s own series with much eagerness, and they are waiting now for Season 2. Season 1 premiered on June 9, 2021, on Disney+. The new season is scheduled to be released in mid-2023 as part of MCU’s Phase Five.

This superhero tv series is based on the DC Comics character Barry Allen aka The Flash, a costumed superhero crime-fighter who has the power of moving at superhuman speeds.

The series is a spin-off of another superhero series ‘Arrow’ and is set in the fictional universe of Arrowverse. The plot begins with crime scene investigator Barry Allen gaining superhuman speed due to the explosion of S. T. A. R. Labs’ particle accelerator.

Grant Gustin was cast in the role of Barry Allen aka The Flash in the series. Other important cast members of the ninth season will include Candice Patton, Danielle Panabaker, Jesse L. Martin, Keiynan Lonsdale, Danielle Nicolet, Jon Cor, etc.

The series premiered on October 7, 2014, on The CW. The ninth which is going to be the final season will be released on February 8, 2023.

This adult animated superhero series is based on the same named Image Comics series. The plot revolves around a seventeen years old Mark Grayson whose father Omni-Man is the most powerful being on the whole planet.

Under his father’s guidance, Mark begins to be trained to become a superhero himself, but he finds himself struggling with the adjustment between his personal and superhero life.

The demands of duties that his father’s shadow has built for him become a challenge to Mark which he must overcome to define himself.

This is another American animated superhero series which is an anthology series based on the same named Marvel Comics series. It is the fourth tv series of MCU and the first animated series by Marvel Studios.

The plot of this series is quite interesting and unique. As suggested by the title, it navigates what would happen if major incidents of MCU happened otherwise.

It takes the idea from the ‘Loki‘ series and follows the establishment of the multiverse in that series to explore further other alternate timelines across the multiverse to check the alternate results of major moments of the MCU films. The Watcher observes all of these as he continues to meet new heroes who keep the multiverse safe.

American actor Jeffrey Wright has given voice to The Watcher who narrates the series. The series premiered on August 11, 2021, on Disney+ with the second season, consisting of nine episodes, and will arrive in early 2023 as MCU’s Phase Five. A third season reportedly is also under development.

This American tv series serves as the 11th Star Trek tv series. The series is a spin-off of ‘Star Trek: Discovery‘ and the plot, set a decade before the happenings of ‘Star Trek: The Original Series’, follows Captain Christopher Pike exploring new worlds of the galaxy with his crew of the starship USS Enterprise.

American actor Anson Mount has portrayed Christopher Pike in the series and Ethan Peck the character of Spock. The series premiered on May 5, 2022, with the second season expected to be released in 2023.