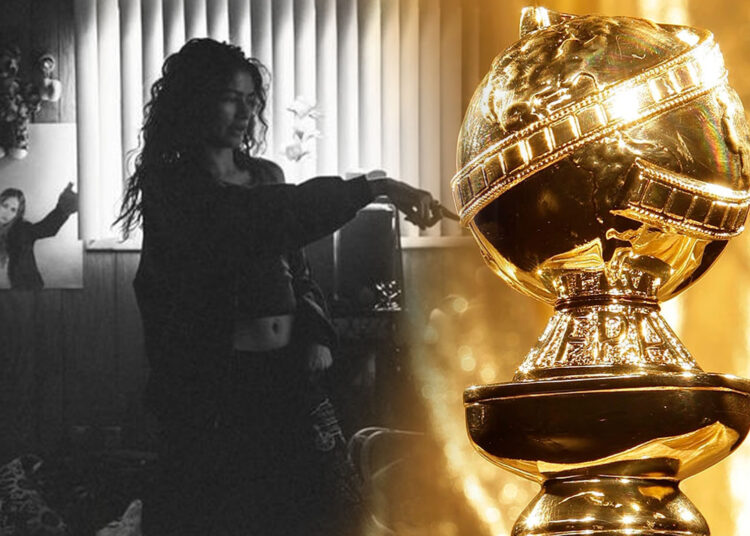 Zendaya has always been known for her best acting in ‘Euphoria’ and again she got the ‘Best Actress In TV Series For Euphoria’ and as she wasn’t there at the event but she posted a picture of her thanking Golden Globes 2023 for choosing her.

If you don’t know Zendaya has already won so many awards and accolades for her series ‘Euphoria‘ and this year also in 2023 the actress again made it as she has been given the Best Actress In TV Series Award for Euphoria and Julia Garner has been praised and given Best Supporting Actress for her role in Ozark Series, which Season 4 was premiered on Netflix this year in two parts.

In her recent post, we can see Zendaya has written a long caption on how she is feeling about her nomination and win too. The actress has thanked her Euphoria team too.

” I’m so sorry I wasn’t able to be there tonight, but I just wanted to say thank you to @goldenglobes for this incredible honor. To my fellow nominees, it is a privilege to be named beside you, I admire you all deeply. Thank you to my Euphoria family, without you, none of this is possible. Lastly, thank you from the bottom of my heart to everyone who has allowed Rue into theirs. I think everyone knows how much she means to me, but the fact that she can mean something to someone else is a gift. I’m honestly at a loss for words as I type this, all I can say is thank you thank you thank you. Goodnight♥️ “

Almost all of her Euphoria team has commented their love and congratulation in the comment box.

As per the news of IndieWire, the Euphoria Actress Zendaya may direct Season 3’s few episodes as she is so much interested in the direction too.

The actress and singer have been known for her vocals and music too, but she gained most of her fame by acting in the Spider-Man trilogy by Marvel Studios as MJ (the love interest of Pete Parker) and as the leading lady in Euphoria Series.

Zendaya will be next seen in the movie “Dune: Part Two” which is under production and its first part was really very good, I must suggest you that please watch this movie you will fall in love with Zendaya’s acting. It’s part 2 will be released in 2023 and she will also be seen in another film called “Challengers” as Tashi Donaldson, it’s a sports rom-com directed by Luca Guadagnino.