Shiloh Jolie Pitt, the daughter of Angelina Jolie and Brad Pitt went with a new look!! 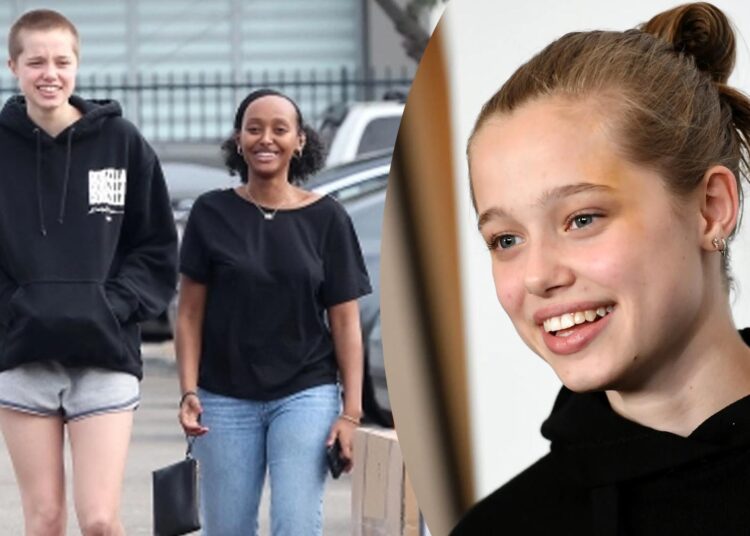 Shiloh Jolie Pitt, the daughter of Angelina Jolie and Brad Pitt decided to change her look as she stepped out with her sister Zahara.

Celebrities try to change their look according to the time. And if we talk about their children then they are also nothing less than anyone.

Whether it is related to changing the look or coming in an outfit that makes them look like more of a celebrity, we have seen every category of it. And if we talk about any celebrity or their kids were making headlines back to back then it is the daughter of Angelina Jolie and Brad Pitt.

Shiloh Jolie-Pitt, 16, made a bold decision to change or transform her appearance! During a recent outing, the daughter of famous actors, Angelina Jolie and Brad Pitt was spotted shopping with her sister Zahara Jolie-Pitt who is 18.

She was seen sporting a brand-new buzz-cut hair look. She went side by side with her older sibling in a parking lot while showing her black hoodie, and grey shorts, matching with black sneakers resembling Converse.

Also Read: Brad Pitt Is Loving His Time With Ines De Ramon As They Were Seen Together!

Here you can check out Shiloh Jolie Pitt’s New Look.

Coming to Zahara then she decided to wear a black shirt which was matching with the blue jeans. Her sneakers were also matching with her sister’s while she was wearing a necklace and earrings. Both the sisters were looking very happy while taking the steps away.

It is not clear why Shiloh was seen in a new look. But whatever the reason it is sure that she has definitely grabbed much attention and headlines. Before this look, she was under-blonde hair and made headlines. If we talk about her evolution of hairstyle over the years and it came with many things and many different styles.

Coming the bond that is there between the sister, that is Shiloh and Zahara, then they went on many outings. And these outings are the result of their special bond which has been created over the years. They are very close to each other that’s the reason why very comfortable too.

It was just a few weeks ago when Angelina Jolie attended the school of Zahara and a source has informed me that it really went well. The source said:

“This time was so different because Zahara has made some really amazing friendships and bonds with other students on campus in just a few short months. Zahara was so thrilled to have her mom by her side while they celebrated homecoming.”