Madonna Went On A Trip To Africa With Her 6 Children!

Madonna is totally enjoying her time with all her six children in Africa while grooving on the song! 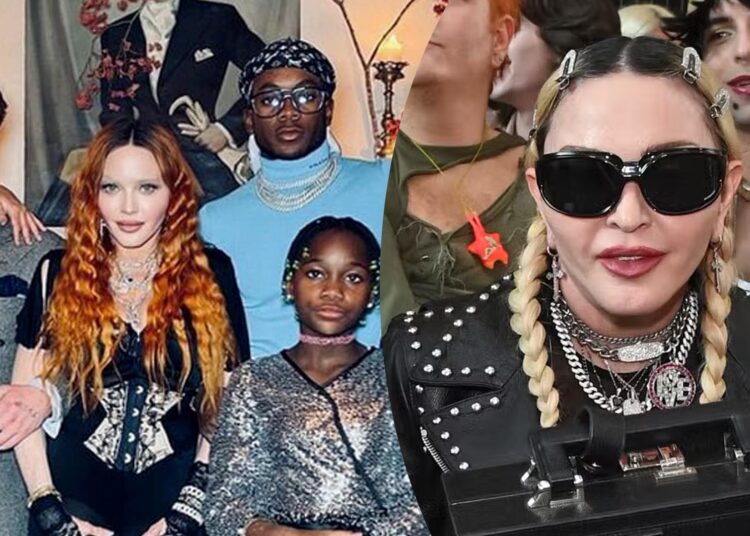 Madonna has 6 children from age 10 years old to 26 as they were seen recently on a family trip going to Africa. We have seen how celebrities care about their children and that’s the reason why they try to arrange trips or outings from time to time.

Whether it is related to an outing for shopping or just for a normal walk or even a vacation, everything fits well if celebrities try to spend time with their time with children. We have seen how they have kept children as their priority in every way.

Something like this has recently happened with the singer Madonna as she was seen with all her six children while going on a trip to Africa. During their amazing trip to Africa, Madonna and her gorgeous family of 6 children got down and enjoyed.

The singer, Madonna, 64, posted a video of herself and her six children, including twins Stella and Estere who is 10, Lourdes Leon is 26, Rocco Ritchie who is 22, David is right now 17, and Mercy is 16 years old, dancing at a party.

Also Read: Lizzo Wanted to Collaborate With Adele, Even Ready To Play Flute For Her!

Here you can check out some posts of Madonna straight from Africa.

Coming to the video and the caption then Madonna kept it very little and said that they were dancing under the full moon with good music and with Masai. Talking about the video then we have seen all her children featured in it with perfect attire and fashion. Some of them are seen in cultural attire and Madonna herself was seen in it.

Talking about the cultural outfit then it was related to a red and black check kind of shawl. Madonna has got a chance to show off her moves not just to the children but also to her fans. Apart from her, all children were also grooving and showing their moves as if it was totally in their genes or naturally got adapted.

Madonna shares an incredible bond with Africa as most of the children have their inheritance or their roots in Africa. She always feels like Africa is her second home and that’s the reason why never forgets a chance to indulge herself in their culture. It is not the first time we are seeing Madonna sharing a glimpse of her children and their amazing moves.

If Madonna is not in the headlines related to her children and her dancing then she made it headlines through her desire to collaborate.

The singer herself has shown her desire to collaborate with Britney Spears.