J-Hope Celebrated New Year With Fans While Performing His Hits! 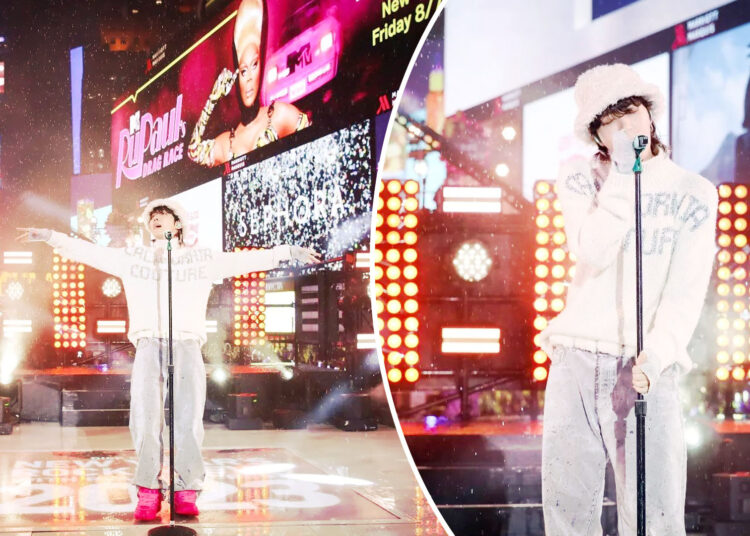 J-Hope was seen doing an impressive performance on New Year’s eve without other BTS members. New Year has been an amazing day for a lot of people as they celebrated with their loved ones while watching TV or having a party.

And if we talk about watching TV with family then the best thing one can have is to watch the live concert that is there. If we talk about performance then a lot of celebrities have performed their best for the new year whether it is related to a solo performance or a group.

If we talk about one of the amazing performances that happened this new year then it is the performance of J-Hope. He was seen entering into a new era but without any members of BTS.

He has taken the stage solo in Times Square to perform his amazing hits. Fans have liked this performance as he has taken one of the biggest stages in the World.

Here you can check out some pictures and videos of J-Hope Performing on New Year’s Eve.

Coming to the looks then J-Hope pulled everything according to the season as he was seen wearing a cream-colored high-neck sweater. The rapper was also wearing gloves and caps for the winter while performing.

Sneakers were becoming highlighted as he performed Chicken Noodle Soup. While J-Hope was performing, the rain was coming down very hard but he did not stop and carried it with a bright smile on his face and a huge performance.

It was just before one night when he was seen doing rehearsals in the winter. He with his dancers were doing some steps that would be there in the performance. Coming to his look then he was wearing a sweatshirt while the dancers were joining him for New Year’s eve.

J-Hope has made history as it is his first major performance ever since BTS decided to take a break. Since every member would be there in the military service so BTS has taken a break with a promise to come back in 2025.

The first member who enlisted in the military is Jin on 13 December 2022. He is right now on 18 months of service where he has shaved his head.

Coming to other members then they will also soon join the military as per the schedule. But before that, they have also given time to music as a solo artist and released some albums.