Ciara Was Seen In Silver While Performing On New Year Eve!!

Ciara was seen in perfect blend of makeup and fashion while taking the stage with her hits!! 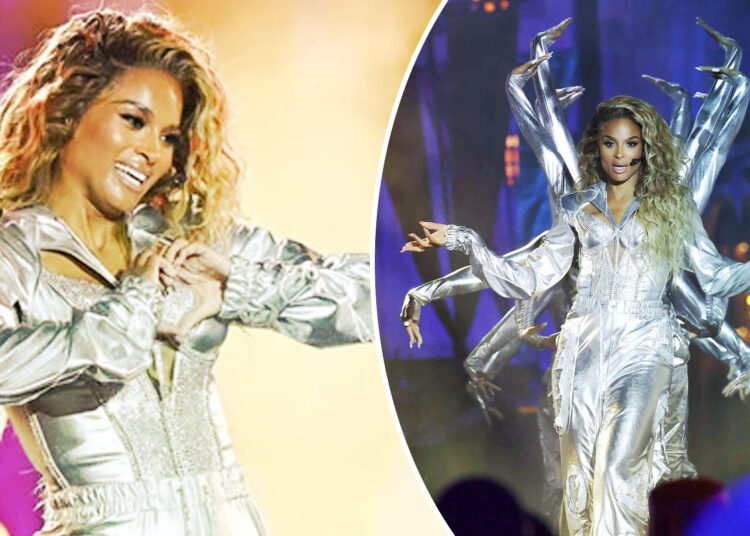 Ciara was looking incredible in her silver jumpsuit while performing for New Year’s Eve with Ryan Seacrest. A lot of celebrities were seen enjoying the new year by giving their performance on some stage.

Instead of enjoying it with their family and friends, they have decided to give their time to the fans with their incredible performance.

Something like this happened again in 2023 when a lot of celebrities came to the stage and decided to give one amazing performance in their amazing outfit. And that’s what happened with the singer Ciara.

It’s been 5 long years since Los Angeles celebrated the new year as a festival. And the singer Ciara returned with an amazing dress and an amazing performance. She has contributed to the stage related to the show from Disneyland. The singer was looking incredible as ever while giving her best in a silver jumpsuit.

Also Read: Megan Fox Was Looking Beautiful In Bikini Top For A Selfie!

Here You can check out some videos of Ciara Performing in a Silver Dress.

Her hair was open in curl and she was sealed with light but incredible makeup. A lot of background dancers also matched her in a silver outfit while the singer was giving an amazing performance with amazing steps.

Apart from performing, she was also hosting the show. Coming to the song she has shown and then it was her hit song called Jump and Better Thangs.

Her incredible performances were joined by a lot of other people. 2022 has been an amazing year for the singer as she was seen in amazing fashion and with an amazing avatar.

Whether it is related to giving the red carpet appearance which was remarkable in the year or having an amazing performance, Ciara proved why she is considered to be one of the best.

Apart from Ciara, J-Hope was also seen on the same stage while performing his hit song called Chicken Noodle Soup. The rapper was seen alone as he was not joined by other members of BTS.

The only reason behind it is the military enlistment of all the members and their solo schedule which was not matched according to the schedule of the rapper.

Fans loved the whole performance of Ciara. And most of all she was looking beautiful while hosting the show. Going back again to 2022 then it was also remarkable for the singer as she dropped her new music.