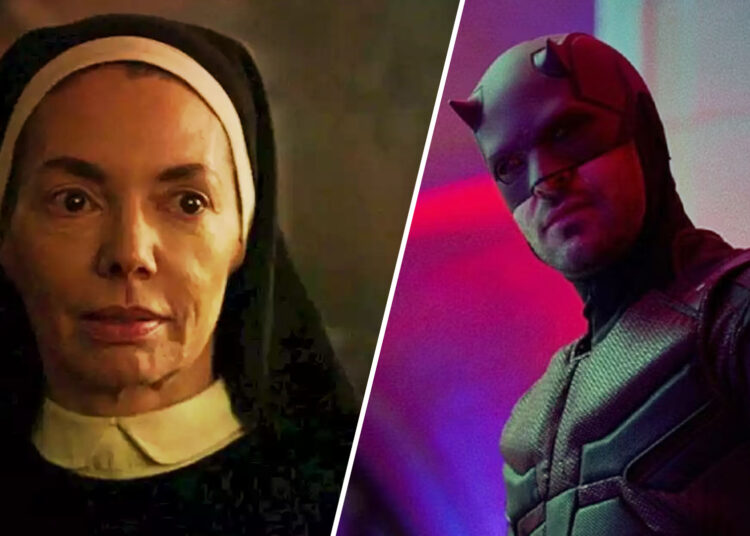 These days, everyone seems to be talking about the television show “Daredevil: Born Again.” After Charlie Cox made a brief appearance as Daredevil in Spider-Man: No Way Home, many fans had high hopes that they would get to see more of the character they had come to know and love from the critically acclaimed Netflix series Daredevil.

Then we got to see Vincent D’Onofrio in Hawkeye, which was followed by the triumphant return of Daredevil in She-Hulk: Attorney at Law. Nobody anticipated this successful comeback, with Charlie Cox himself admitting in an interview that he “did not expect to be invited to repeat the part.”

Luckily, Charlie Cox and us, as fans,  have a new series entitled Daredevil: Born Again, although this Daredevil isn’t exactly the same as the one we last saw.

So, in this post, we will go over everything there is to know about this series, including the question of whether or not Joanne Whalley will reprise her role in “Daredevil: Born Again.”

The new Disney+ series Daredevil: Born Again will feature Joanne Whalley again in the title role of Daredevil. In the third season of the popular Marvel Netflix show, Whalley played the role of Sister Maggie Grace, a character who made her debut in that season.

Later on, the titular superhero discovers that Sister Maggie is actually his mother, who, as a result of postpartum depression, abandoned him and his father.

Additionally, Whalley discusses the prospect of playing the same part in the upcoming Daredevil: Born Again television series for the Marvel Cinematic Universe in a recent interview with ComicBook.com. The actor remembers having a “wonderful time” while working on the original series.

Other Details We Know About Daredevil: Born Again

Whalley joins the other cast members who are still hoping to return to the Daredevil series even though she has received the call to reprise her role in the new Daredevil show.

Among them is Deborah Ann Woll, who played Karen Page, the assistant to Murdock, Rosario Dawson, who played Nurse Claire Temple, and Jessica Henwick, who plays the lead role in Iron Fist (Colleen Wing).

However, Vincent D’Onofrio, who played the evil businessman and criminal lord Wilson Fisk, aka Kingpin, in the previous season, is expected to return in the upcoming season. Aside from Cox, he is the only character that has been confirmed to return in Daredevil: Born Again.

The first season of Daredevil: Born Again, which will debut on Disney’s streaming service in 2024 as a part of the MCU’s Phase Five, will have 18 episodes, making it the longest season of Disney+’s original Marvel entertainment to date.

D’Onofrio recently hinted that the show will go deeper into the characters than ever before and put viewers on the edge of their seats after each episode, despite the fact that little is known about the plot of the new series.

Who Are the Confirmed Cast and Crew of Daredevil: Born Again?

The announced cast for Daredevil: Born Again is currently quite small. The only actors who have been confirmed to appear at this time are Charlie Cox and Vincent D’Onofrio.

Currently, Matt Corman and Chris Ord, both writers for the 2010 television program Covert Affairs, will write the show. This will be the first project that they will work on in the Marvel Cinematic Universe. Additionally, those two will serve as the project’s executive producers.

Also Read: 10 TV Shows Like Star Trek Prodigy that One Needs to Watch!

Daredevil: Born Again’s first season will have 18 episodes, and production on the Disney+ show will start in February 2023 with the working title “Out the Kitchen.”

Cox has acknowledged that he is unsure whether Netflix’s Daredevil series would be canon to the Marvel Cinematic Universe because he hasn’t yet read any scripts for Born Again, even though the series will effectively act as a spiritual successor to Daredevil.

As a part of the Marvel Cinematic Universe’s Phase 5 storyline, the first episode of Daredevil: Born Again will debut on Disney+ in the early part of 2024. There has been no announcement of a specific date as of this writing.

Earlier in the year, during Marvel Studios’ appearance at San Diego Comic-Con, the title Daredevil: Born Again was revealed to the public for the first time.

Moreover, the series will start production in New York City from February to December 2023, according to the sources.