Julia Roberts held the title of the highest-paid actress in the world for most of the 1990s and the first part of the 2000s. 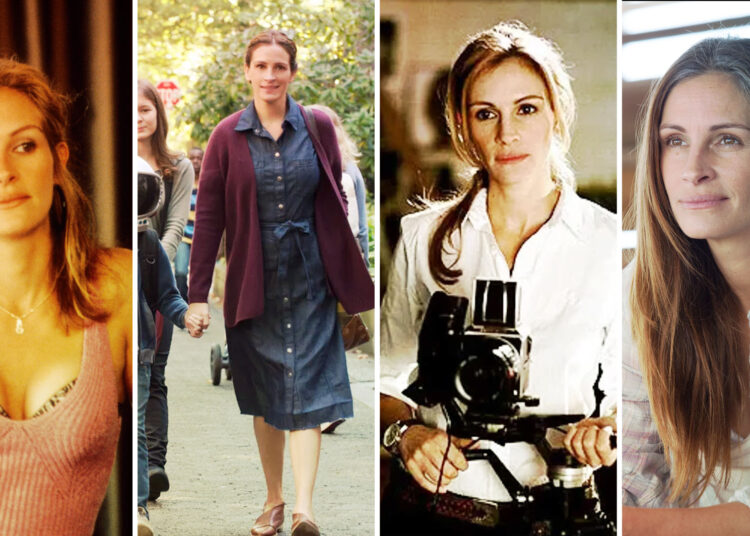 Julia Roberts is a well-known and highly praised actress of the modern era. She is best known for her roles in the movies Pretty Woman, Steel Magnolias, and Erin Brockovich.

When she was a child, she imagined herself in a variety of different careers, but the acting was never one of them.

However, as she got older, she came to the conclusion that acting was her true passion, and so she set out on the path of becoming an actress.

Roberts has made an appearance in about 45 films and has been nominated for multiple awards, including an Academy Award, a British Academy Film Award, and three Golden Globes.

Julia Roberts held the title of the highest-paid actress in the world for most of the 1990s and the first part of the 2000s, and the majority of her highest-rated movies on IMDb are from that same decade.

Here in this article, we will discuss “Top 10 Julia Roberts Movies.”

Below is a list of the top 10 Julia Roberts movies. So, h Have a look at each of them:

The story focuses on the experiences of three young Portuguese-American friends who grow up together while working in a pizza parlor in a coastal town in Connecticut. The movie was met with favorable critical reception.

August: Osage County is a superb tragicomedy that is based on Tracy Letts’ 2007 play of the same name, which won the Pulitzer Prize.

In the movie, Julia Roberts plays Barbara Weston, the dysfunctional matriarch of Violet Weston’s eldest daughter, who is about to get divorced.

In the category of Best Performance by an Actress in a Supporting Role, Julia was nominated for an Oscar.

Julia Roberts rose to stardom thanks to her portrayal of Vivian Ward, for which she was nominated for both a Golden Globe and an Academy Award for Best Actress. Pretty Woman was originally designed as a dark narrative about s*x labor and class, but it was eventually re-imagined as a romantic comedy.

Julia Roberts plays a s*x worker who meets cold and lonely businessman Edward Lewis, played by Richard Gere, and consequently experiences a significant increase in income. There is a strong chemistry between the two.

Closer, a romantic drama by Patrick Marber is another movie that was adapted from a well-known play. In the story, two heartbroken couples make bad dating choices and end up falling for each other’s partners.

The character of Anna Cameron, played by Julia Roberts, is portrayed as flawed, egotistical, and emotionally immature. Although she does a terrific job playing, it’s the supporting players, like Natalie Portman as Alice, who steals the show.

Julia Roberts’ performance in Erin Brockovich, which earned her an Academy Award, is one that acting critics will never forget. She plays a jobless, divorced mother of three in this biographical legal drama film who is desperate to provide for her children.

Erin Brockovich doesn’t contain any melodrama and covers a wide range of important subjects. Her job is intensely dynamic, and she constantly puts her skills to the test.

Julia Roberts plays the role of Kitty Kiernan in the film adaptation of the historical biography of Irish revolutionary Michael Collins. Although Roberts’ performance as Kitty isn’t her best, her effort is still noteworthy.

She plays one of Liam Neeson’s most vengeful characters, who is engaged to the famed Irish revolutionary commander and hero, who is played by Liam Neeson in the movie.

Throughout the entire movie, Julia Roberts can be heard combining her Irish and American accents. However, she still maintains a respectable acting level.

In 1999, the film Notting Hill achieved the highest gross at the box office in British history. It’s a love story about a London bookseller and a well-known actress (Julia Roberts).

She follows the directions in the script meticulously and portrays her role, Anna Scott, in a sophisticated way to convey that she is very famous but vulnerable. Robert and Grant’s strong chemistry perfectly captures the film’s brilliant theme of love between people from different social classes.

The film Steel Magnolias is an adaptation of the play of the same name written by Robert Harling in 1987. One of the most compelling movies with female leads on Netflix, this lovely comedy-drama centers on the relationships between six women who frequent the same beauty salon.

Julia Roberts was nominated for an Oscar in the Best Actress in a Supporting Role category for her portrayal of Shelby Eatenton-Latcherie.

The coming-of-age drama Wonder, which was based on the 2012 R. J. Palacio book of the same name, follows a kid named August Pullman who has Treacher Collins syndrome.

Isabel, August’s mother, is played by Julia Roberts, and she is a standout example of a kind and intriguing parent in her own right.

The heist comedy Ocean’s Eleven is a remake of the film of the same name from 1960, which starred the Rat Pack. The new version features an all-star ensemble.

Tess Ocean, played by Roberts, and a few additional subplots are presented to the audience in the training activities. She plays the role of Ocean’s ex-wife and is dating the proprietor of the casino they are trying to rob.