Pete Davidson, who recently broke-up with Kim, was seen with Emily at a Knicks-Grizzlies game. 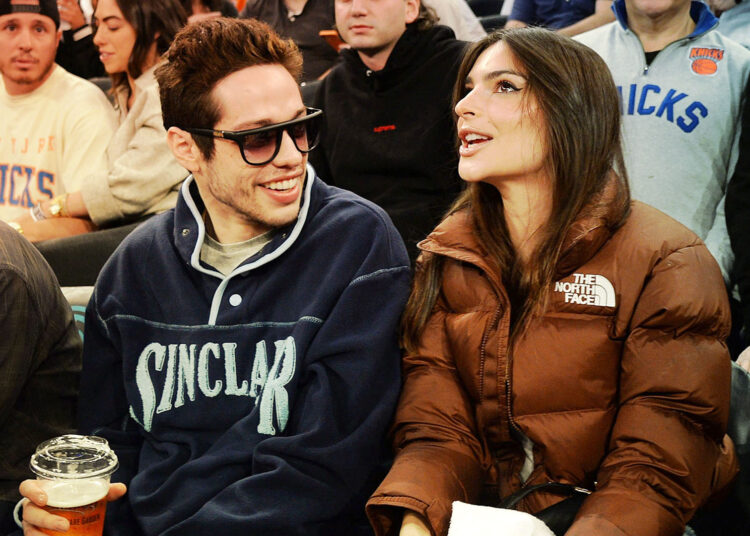 Pete Davidson and Emily Ratajkowski were spotted together at the New York Knicks game. Their sighting together has given the internet a fresh and new topic to gossip about.

What were they wearing? Did they share any intimate moments? Scroll down the article to know more.

Pete Davidson and Emily Ratajkowski were in between the famous actor Ben Stiller and the American pop singer, Jordin Sparks. The whole line at the front was nearly filled with camera-capturing celebrities. And in between all of them, the newest dating doves were enjoying the game.

Pete Davidson was wearing a navy-blue colored sweatsuit with ‘SINCLAIR GLOBAL’ written on it, implying that it was from the streetwear brand, Sinclair Global. His sweatsuit was complemented with silver JJJJound Asics.

To increase the street intensity of the whole outfit, Pete covered his face with big black sunglasses, something that always looks good on his wide face.

Emily Ratajkowski was wearing a North Face puffer jacket, brown in color. Her legs were covered by denim blue jeans. To make the outfit bossy and classy, Emily covered her feet with sassy snakeskin boots. The cherry on the top was her Dior Saddle Bag.

Both Emily and Pete were holding a beer cup in their hands. They must have drank sip by sip throughout the game. The alleged couple looked happy together.

Is It Recent Or Not?

While doing some investigation, we found out that Pete Davidson and Emily Ratajkowski have been seen together before as well.

A photographer sited them together in Brooklyn earlier this month. It might be possible that Pete and Emily must have been enjoying some quality time together before that sighting.

Before the Knicks VS Grizzlies game, Pete and Emily were seen together at a Friendsgiving dinner together.

Pete Davidson has recently been ‘officially’ single when he and his recent ex, none other than Kim Kardashian called off their dating scene in August. Both of them dated for a total of 9 months.

Emily too recently had a break-up with her ex-husband, Sebastian Bear-McClard. She announced that the reason behind her break-up is that she thinks that her husband was cheating on her. Both Emily and Sebastian have a 1-year-old son together, whose name is Bear.

Will Pete and Emily take this relationship ahead? Guess we will have to wait and watch.