Chan Kong-sang, better known to us as Jackie Chan, is a legendary figure in the martial arts world. He has enjoyed success in the entertainment industry, working as an actor, director, producer, action choreographer, stuntman. 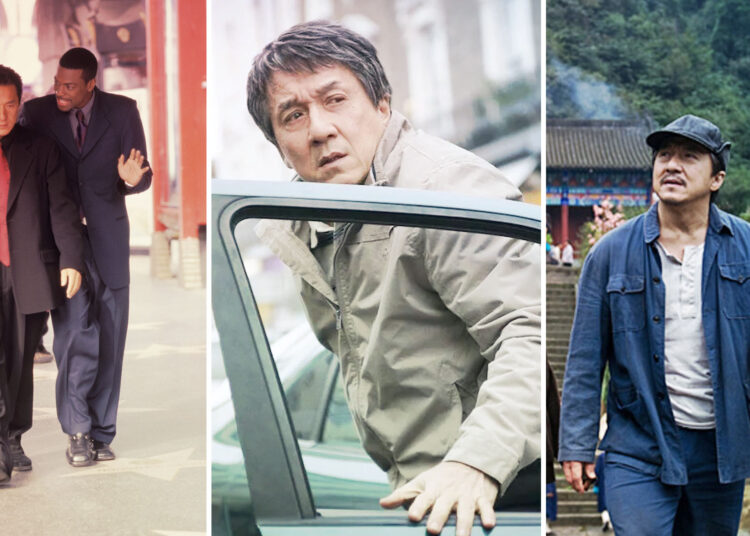 Chan Kong-sang, better known to us as Jackie Chan, is a legendary figure in the martial arts world. He has enjoyed success in the entertainment industry, working as an actor, director, producer, action choreographer, stuntman, and in a variety of other roles.

He is well-known both in Asia and the West for his flawless fighting technique and comedic timing.

Jackie Chan is renowned for having performed all of his stunts by himself despite breaking and damaging nearly every part of his body. He has appeared in more than 100 Hollywood and Hong Kong movies, of which more than ten were his own directing efforts.

Jackie Chan had acted in a number of critically acclaimed films prior to this point in his career. We will thus talk about the “Top 10 Jackie Chan Movies” in this article. So, if you are a fan of Jackie Chan and want to learn about some of his best movies, read this article all the way through the end.

Below is a list of the top 10 Jackie Chan movies. Take a look at each of them individually:

The Karate Kid is a martial arts drama film that was released in 2010 and is a part of The Karate Kid franchise. It was directed by Harald Zwart. This film is a remake of the first Karate Kid movie from 1984, with China as the setting and kung fu as the martial art instead of karate.

It does not take place in the same fictional universe as the four previous Karate Kid movies.

An American martial arts action comedy titled Shanghai Knights was released in 2003. It is the follow-up to Shanghai Noon and the second movie in the Shanghai franchise.

Despite the film’s mixed reception, it did well at the box office. The comedy in this film is geared more toward adults than what Jackie Chan fans are used to seeing, but this does not diminish the quality of the laughs in any way; on the contrary, they are just as good as they have always been.

The Forbidden Kingdom is a wuxia movie that was released in 2008 and starred Jackie Chan and Jet Li. The screenplay for the movie was written by John Fusco, while Rob Minkoff directed the movie.

It is the first movie to feature Jackie Chan and Jet Li, and it is loosely based on the 16th-century novel Journey to the West. Yuen Woo-ping choreographed the action scenes.

Benny Chan is responsible for the screenplay, production, and direction of the Hong Kong action comedy film Rob-B-Hood, which was released in 2006. The film stars Jackie Chan, Louis Koo, Yuen Biao, and Michael Hui.

In the movie Rob-B-Hood, a group of thieves led by Thongs (played by Chan), Octopus (played by Koo), and the Landlord (played by Hui) abduct a baby from a wealthy family on behalf of crime syndicates.

The novel The Chinaman by Stephen Leather was published in 1992, and it served as the inspiration for the 2017 action thriller film titled The Foreigner, which was directed by Martin Campbell and written by David Marconi.

The movie centers on a Nung Chinese guy from London who wants revenge for the murder of his youngest daughter. Critics gave it largely positive reviews and praised the action scenes, score, and unconventional acting from Chan and Brosnan.

The Rush Hour film series is an American action comedy film series that was created by Ross LaManna and directed by Brett Ratner. Jackie Chan and Chris Tucker have appeared in leading roles in each of the films in the series.

Jackie shockingly has the widest range in this series, as we witness him participate in trash-talking, display his humorous wit, perform violent action, and even act out in sad scenes.

Drunken Master is a martial arts comedy film that was released in Hong Kong in 1978 and directed by Yuen Woo-ping. Jackie Chan, Yuen Siu-tien, and Hwang Jang-lee starred in the film.

It was a hit in Hong Kong, grossing 2.5 times as much as Yuen and Chan’s previously released movie, Snake in the Eagle’s Shadow, which was also regarded as a hit. There is much to be learned from the technical martial skills celebrated in Drunken Master.

Snake in the Eagle’s Shadow is a martial arts action-comedy film that was released in Hong Kong in 1978. Yuen Woo-ping made his directing debut with this movie. The story of movie is about an orphan named Chien Fu who is mistreated in a kung fu school.

He meets an old beggar named Pai Cheng-tien, who trains him in Snake Kung Fu and ends up becoming his sifu. The movie is great for repeat viewings since you just want to relax and take in Jackie’s martial arts skills.

The 1998 Hong Kong action comedy film Who Am I? was directed by Benny Chan and stars Jackie Chan, who also played the lead character. The movie was released in Hong Kong on January 17, 1998.

The movie is also Chan’s second to be written and produced in English; the first was Mr. Nice Guy. It’s a surprisingly emotional film that shows the protagonist losing his memory and the subsequent search for his true identity.

The martial arts film Rumble in the Bronx, released in 1995, featured the skills of Jackie Chan, Anita Mui, and Françoise Yip and was co-produced by Hollywood and Hong Kong.

The film Rumble in the Bronx is credited with giving Jackie Chan the international renown he currently enjoys.

Along with the inventive action scenes, Jackie also portrays the sympathetic and unintentionally amusing protagonist that we have all come to anticipate from him in the movie.