Dua Lipa has never shied away from her Albanian heritage, which the pop star has mentioned several times throughout her career. 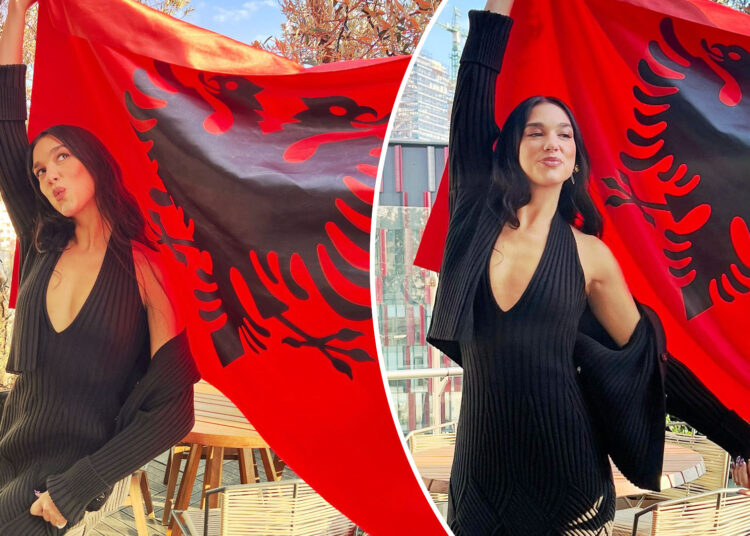 Her parents emigrated from Pristina, Yugoslavia, to London, where the singer Dua Lipa was born and granted her British citizenship, but she now has papers to prove she can officially call two nations home.

The duo ended their future nostalgia show with a final performance in Albania’s capital, Tirana, at the Sheshi Skënderbej venue on November 28, 2022, coinciding with 110 years of Albanian independence. During her visit to the Eastern European nation, Lipa met with President Bajram Begaj and the city’s mayor, Erion Veliaj.

During their meeting, Dua Lipa was granted official Albanian citizenship in a high-profile ceremony that was recorded and uploaded to the pop star’s Instagram accounts. In two separate posts, Dua was surrounded by the country’s red flag with a black double-headed eagle.

In her first post, Dua rocked a chic blue and plaid patterned dress with sparkly white shoes as she signed legal documents officially making her a citizen of the country.

She captioned the post: “Thank you President Bajram Begaj and Mayor @erionveliaj for this honor they got my Albanian citizenship!! thank you, po ndihem shume krenare”

However, the celebration of her citizenship did not end there, she uploaded another video and a series of photos where she flaunted the Albanian flag during the celebrations of the country’s 110th anniversary of independence.

In the posts, she wore a black sweater dress with a matching blazer. and red shoes; an inversion of the color scheme of the Albanian flag.

Dua captioned the now-viral Instagram post: “110 YEARS OF INDEPENDENCE so happy to be in Tirana, Albania as the newest citizen to perform for you all tonight FINAL FUTURE NOSTALGIA SHOW po pres me ju ! !!!!!!!!!!!!!

Dua previously said her parents fled Kosovo after war broke out in the country. In the late 1990s, war crimes were committed against Kosovars and ethnic Albanians. The war in Kosovo culminated in the displacement of between 1.2 and 1.45 million Kosovo Albanians, with 13,500 reportedly killed.

For Dua to visit Albania, on the last leg of a successful tour, on the country’s independence day, and to receive her citizenship at the same time, it must be an incredible experience.

When her parents left their war-destabilized country years ago, seeing their daughter become one of the most listened to and celebrated stars in modern pop, proudly carrying her country’s flag to represent Albania, sounds like a happy ending. fiction. But it’s real.