David is holding the placard with absolutely no expression and just a straight face and his Son Ty Tennant is looking out into the audience. 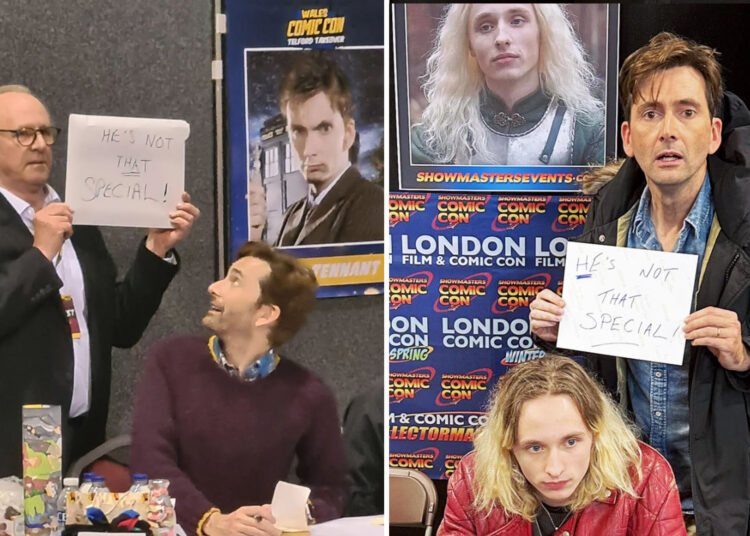 David Tennant is a Scottish Actor who won extreme popularity for his role as the tenth incarnation of the Doctor (2005–2010 and 2013) in the BBC science-fiction TV show Doctor Who,  where he is reprising the role from 2022 to 2023 as the fourteenth incarnation.

Doctor Who is a 1963 sci-fi series where the doctor is said to be time-traveling through space in a shop known by the acronym TARDIS. David Tennant is the fourteenth incarnation of that Doctor.

David Tennant made a hilarious joke?

Well, we all have seen how the Father-Son relationship is and how they often tend to tease their children. David Tennant has a history of making fun of their children’s traditions.

At comic-con, David Tennant was seen putting a placard over his son Ty Tennant, who recently acted in HBO’s “House of The Dragon ”, head. The placard said, “He’s not that special”.

Georgia Tennant posted this picture where David is holding the placard with absolutely no expression and just a straight face and his Son Ty Tennant is looking out into the audience as it seems to be a fan meet and greet conference. He probably made this hilarious joke as a sequel.

Making fun of their son is a family tradition.

Their family has a history of pranks. Georgia posted another picture where David Tennant’s father-in-law Peter Davison, who starred as the fifth “Doctor Who” in the 1980s, holding a placard over David’s head that says ” He’s not that special”.

The followers went crazy bursting into laughter about the whole iconic, not an a-special thing. One user even commented and asked Georgia to stand behind all three of them with a placard saying “None of them are that special”. The post is hilarious and it only makes the bond between a father and a son strong.