Lindsay Lohan transformed into a bunny on skis while channeling a gorgeous Barbiecore look. 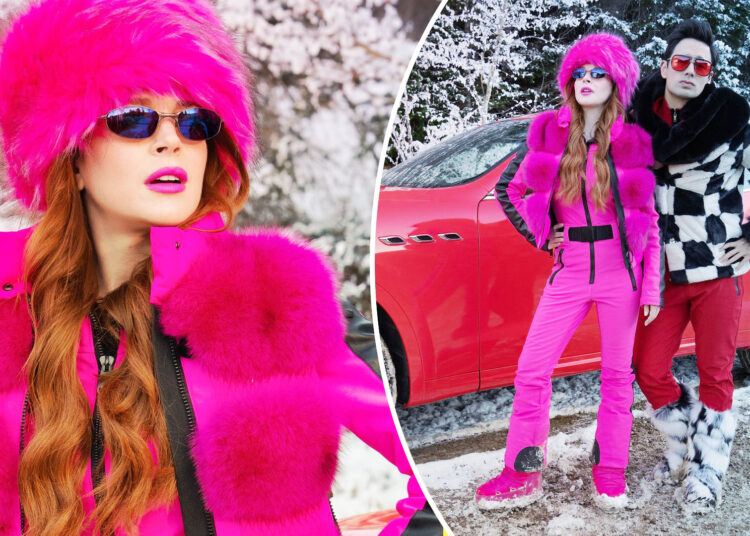 The Mean Girls actress Lindsay Lohan made all kinds of headlines this fall as fans gushed over her new movie Falling for Christmas, and this week she made sure to promote it while stunning in pink on Instagram.

Lindsay Lohan updated herself in a bright pink Fuschia look, opting for skiing outerwear and also made sure to tag the Netflix platform that streams her film. Lindsay sizzled with pink lipstick to match her outfit. She also received over 312,000 likes for her holiday post.

Posting to her 11.8 million followers, the former child star looked all grown up as she posed amid snow-covered trees.

Lindsay sent out a confident energy as she put her hands on her hips and modeled a bright pink faux fur jacket, a black one-stripe, and a matching top underneath. The 36-year-old also donned a chunky pink faux fur hat, plus lipstick. The statement shades added Hollywood glam as Lohan also rocked pale and pink makeup.

Here you can check out Lindsay Lohan’s Wonderful Wednesday Look.

Other photos showed The Parent Trap star next to a red car and amidst lots of snow as she posed with the male. She wrote in the caption: “Happy Wednesday! Have you seen #fallingforchristmas yet? 💝.”

In an interview with Netflix, as the buzz around her holiday movie builds, Lohan revealed:

“I loved that it was a rom-com. I think that was the first thing. And I loved that it was a seasonal Christmas script. It was really exciting for me because I’d never done a holiday movie before. It was in a lot of physical comedy, which I was really excited about because physical comedy is one of my favorite things, especially in romantic comedies.”

2022 brought more than just career news for Lindsay, who tied the knot with husband Bader Shammas this year. The two announced their engagement in 2021. For more from Lindsay, follow her Instagram.