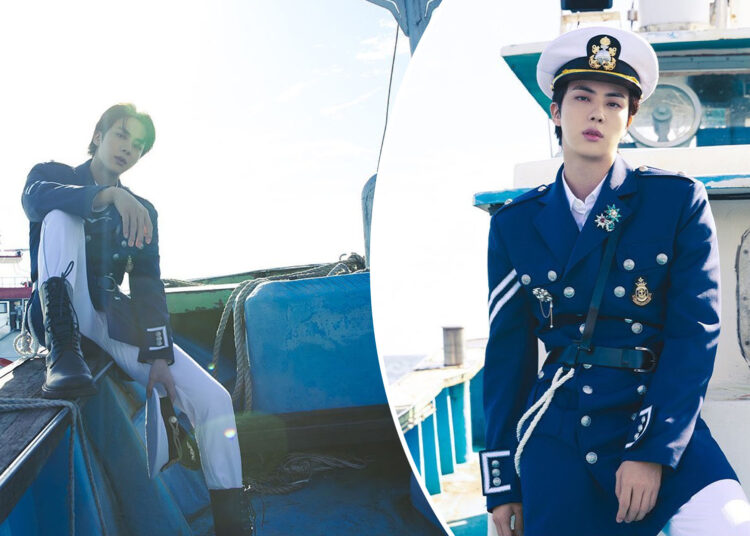 Kim Seok Jin aka Jin is a South Korean singer and songwriter. He is one of the members of the boy band BTS.

Jin looked drop-dead gorgeous in the captain uniform. With a white sailor hat and blue coat, he looked extremely handsome. The photos were shot with a background of the sea and he was posing for the pictures on a boat.

From the pose to the expressions of the singer, everything was just perfect. The pictures were taken from different angles and the concepts were also different for different pictures.

With three concepts, the unique 8-photo folio “Sea of JIN island,” which was Jin’s concept, portrayed many emotions that may be felt in the sea. After the appearance of the captain of the sea, he was later seen dressed as a fisherman for whom life is the sea.

Here you can check out the Pictures of BTS Jin.

For a fisherman, everything depends on the sea, their life, and their earnings. He, portrayed as a fisherman, looked immensely handsome.

As soon as the photo folio was uploaded, the fans started flooding the comment section with their love.

Some of the comments included, “I would like to be a fish in order to appear near your boat and observe your beauty”, and “Are you traveling at the speed of light? Because time always seems to stop when I look at you.

Beautiful”, “I would like your ship to crash into me only if you are driving it”, “Wow, what a beautiful picture.”

In recognition of their contributions to Korean culture, he and his bandmates received the fifth-class Hwagwan Order of Cultural Merit from the President of South Korea in 2018.

During Coldplay’s Music of the Spheres World Tour concert in Buenos Aires in October, Kim sang the song live; the performance was televised live to cinemas in more than 70 countries.