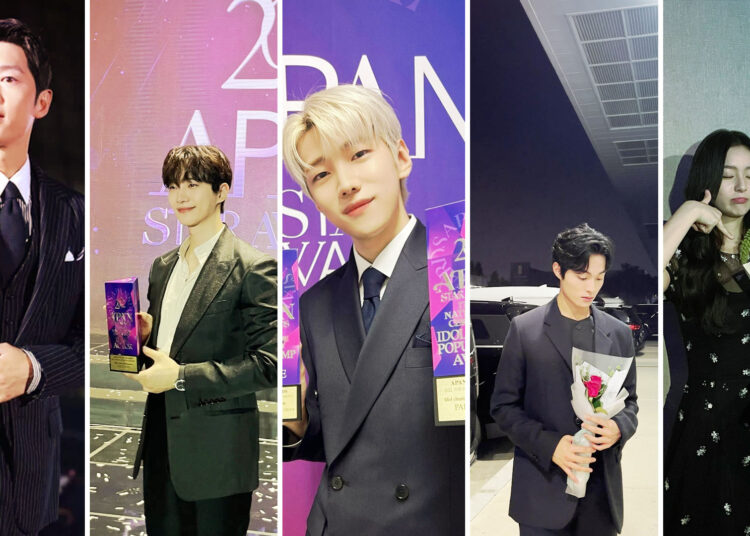 On September 29, 2022, in the Korea International Exhibition Center in Goyang’s Western Ilsan District, Gyeonggi Province, the 8th APAN Star Awards ceremony was held. It was held face-to-face for the first time in two years, hosted by Girls’ Generation’s Kwon Yu-ri and Jung Il-woo.

The televised dramas that were shown in South Korea between March 2021 and July 2022 on terrestrial, cable, over-the-top, and web platforms were recognized for their excellence in the 2022 award ceremony. Dramas from over-the-top (OTT) media services were also under new categories this year.

Many big celebrities attended the award ceremony on that day and took home a reward for their hard work.

Several celebrities showed up in opulent gowns and suits on this day to commemorate a successful year for dramas, including TV dramas, streaming service series, etc.

Not too long ago, the 2022 APAN Star Award nominations were revealed. “Squid Game,” “Extraordinary Attorney Woo,” and “The Red Sleeve” were among the most popular entries on the list. At the award ceremony, KONNECT performers including Kang Daniel, Yuju, and Chancellor stood out among the various performances.

Along with Song Joong Ki, many actors and actresses took home awards under different categories. Song Joong Ki grabbed the biggest award of the night, the “daesang” or the grand prize for the drama “Vincenzo” that released from February to May 2021.

In competition with “Squid Game,” “Extraordinary Attorney Woo,” “My Liberation Notes,” and “Our Blues,” “The Red Sleeve,” starring Lee Jun-ho and Lee Se-young, which was released from November 2021 to January 2022 won the best drama of the year award.

On the other hand, Kim Sung-ryung, Shin Min-ah, and Park Jin-hee, were the winners of the Top Excellence Awards for Actress for OTT, miniseries, and serial drama. Along with these other actors and actresses also won awards in different categories.