After all the dating rumors with Leonardo DiCaprio, the model Gigi Hadid was seen in silver dress !! 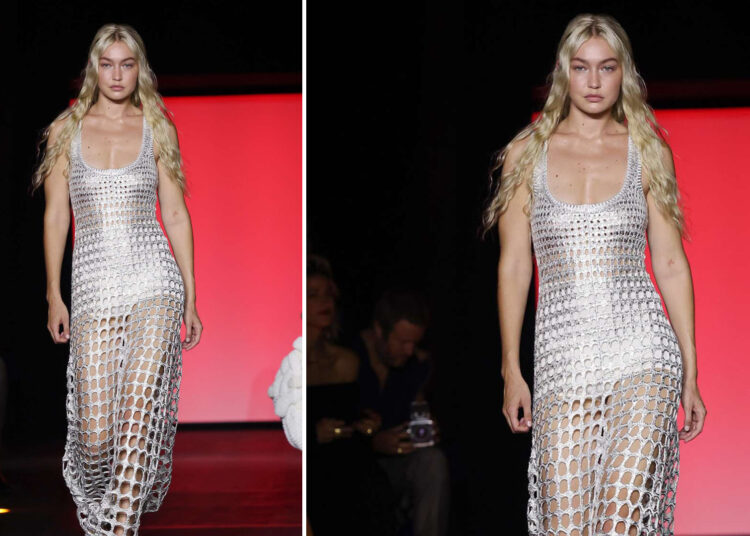 Gigi Hadid Update: A lot of fashion show is right now going on and we have seen a lot of models and celebrities attending them. And if it is a fashion show then we know that what is going to be the highlight is nothing other than the celebrities with their perfect look and perfect fashion they carry.

Something like this has happened with a lot of celebrities who had gained headlines due to these and among them is model Gigi Hadid. The model was recently seen in a silver dress while walking on the runway at Paris Fashion Week.

The 27-year-old model Gigi Hadid was recently seen at Paris Fashion Week. Her latest runway was the favourite of all as she has given her best on 29 September 2022. She was wearing a very beautiful silver dress with an incredible neckline that was low and revealed her cleavage.

Gigi Hadid was wearing a silver dress and her full chest was almost displayed. A long dress was not hiding her legs as we can see it properly as she was walking very confidently on the runway. Beneath the dress, we can see the model was wearing a top of white and sorts in white colour.

Coming to her hair then the model decided to go blonde hair and kept it down. Her hair was parted in the middle and was seen curled. Her makeup was also to the corners as we have seen her nude lipsticks and silver eye shadow matching with the dress.

It is not the first time that we have seen model Gigi Hadid walking down the runway in any fashion week of this month. It was recently when she walked for Milan Fashion Week as she was wearing a skin-tight black long-sleeve dress. She has accessorized herself with black platform heels.

This recent runway of Gigi Hadid came after she was seen having a great time with her boyfriend Leonardo DiCaprio. It was recently when the model was surrounded by many rumours of dating the actor although it is not confirmed by any of the party. They are right now in the phase of knowing each other and that is the reason why giving each other time from their work.

Right now, Gigi Hadid doesn’t want to get serious in a relationship as she wants to focus more on her career and her daughter. Coming to the reaction of ex-boyfriend Zayn Malik then he is not happy with it at all.