Taylor Swift Arrived At VMAs In A Silver Diamond Dress With Red Lipstick!

Taylor Swift was seen in a sparkled dress with her signature lipstick at MTV Video Music Awards! 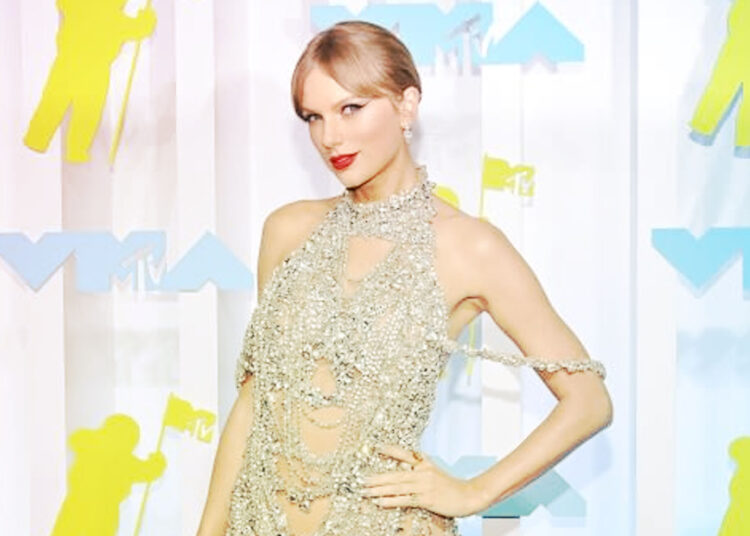 Taylor Swift stole the show as she was spotted In A Silver Diamond Dress at VMAs Event. It is almost a few months away from ending the year and we are getting a lot of award functions coming our way.

Whether it is related to music or film or series, now we will be getting a lot of details related to it in the coming days. But if we talk about any recent award show that happened with the glamour of a lot of celebrities then we have MTV Video Music Awards.

And the one who stole the show was Taylor Swift who arrived in diamonds and gave a surprise to fans.

The 32-year-old singer Taylor Swift was seen at MTV Video Music Awards. She has not kept her path away from this award and looks very beautiful in diamonds. She made a surprise appearance as it was not expected and walked away as a big winner.

Here you can check out Taylor Swift’s look

Taylor Swift was looking very beautiful as she arrived on the red carpet. Her dress was silver and sparkling. Coming to her makeup then it was totally up to mark as she was maintaining her look with signature red lipstick. Coming to her hairstyle then she was seen in a bun.

To match her overall look, she went with the same silver sandals which were high heels, and matching earrings. In the same award function, she got a big win and grabbed the Award for Best Long-form Video.

In the winning speech, Taylor Swift thanked her costar Sadie Sink with all the team who were brilliant. After this win, a lot of fans came on social media and appreciated her and called her well deserved one. Taylor Swift has been nominated in five categories for her work called All Too Well, the short film.

Coming to a nomination then it included Best Direction along with Best Cinematography and Best Editing. She was also nominated for the Coveted Video Of The Year and Best Long-form Video with which she won.

Coming to the MTV Video Music Awards then Taylor Swift has a long history in this award function. She has got 42 nominations and won 11 of them.

Taylor Swift made her debut in 2008, around 14 years ago when she was nominated for Best New Artist. She came back again as a nominee for the Best Female Video and she won this award for You Belong With Me.

The same year was also famous and controversial for Kanye West interrupted her speech to declare that Beyoncé is the one who has the best videos of all time. It was then in 2017 when she made an epic video for the award show called Look What You Made Me Do.