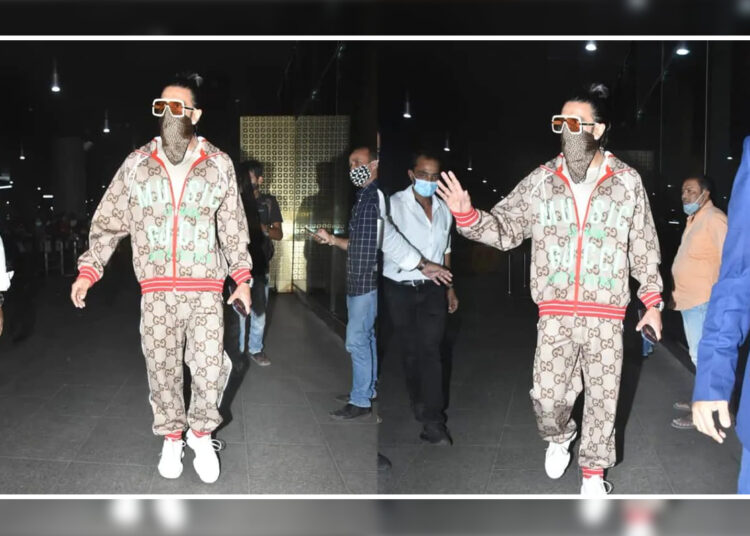 Ranveer Singh Update: If there’s anyone in Bollywood who literally gives a jaw-dropping look to his fans then it has to be none other than Ranveer Singh. While he was recently spotted at the airport in Mumbai. His looks literally left everyone yet again speechless.

Well, his airport looks at the Mumbai airport were something stylish and cool and the paparazzi just couldn’t stop themselves from capturing his amazing airport look.

Read ahead to know more about Ranveer Singh spotted at Mumbai airport in a cool look.

While celebrities have always been clicked in a cozy and stylish look at the airports. We recently had Ranveer Singh who was at the Mumbai airport to take a flight to join his wife Deepika Padukone. However, it wasn’t anything about the couple at the airport that got clicked by the paparazzi.

Rather Ranveer Singh was actually in a cool look that seemed to kill everyone. While just before boarding his flight from Mumbai. Ranveer Singh gave some time to the paparazzi and posed for them. However, Deepika during this was nowhere to be seen with him.

He nails it with his White hoodie and brown velvet pants

Ranveer Singh has always come up with a look that no one carries better than him. In fact, most of his out-of-this-world looks are always captured at the airport. Well, as such this time too when Ranveer Singh arrived to board a flight from the Mumbai airport. His looks were killing everyone.

The Befikre star for his airport look wore a white hoodie which he paired up with a brown velvet flared pants. His looks were enhanced with his bucket oversized Gucci hat that he wore along with his outfit. Traveling from Mumbai he was even seen carrying a red Duffle bag with him.

As paparazzi spotted Ranveer as he arrived to board a flight from Mumbai. He was leaving Mumbai to join his wife Deepika Padukone for the Cannes Film Festival 2022. Not to miss, Deepika is to attend Cannes this year as well, as a member of it.

Alongside Deepika, we are to see Ranveer Singh joining her too for the event. Meanwhile, both Ranveer and Deepika are always spotted together at one or the other event. In fact, professionally too they have been going busy a lot. The duo after a long time would be seen together at the Cannes this year.

On the professional ground as such Ranveer is to be seen in the film by Karan Johar that’s titled “Rocky Aur Rani Ki Prem Kahani”. It’s a movie that’s to have Alia Bhatt in it too. However, fans of Ranveer Singh are more excited to see his looks at the Cannes Film Festival this year as he would walk the red carpet with his wife Deepika Padukone.

Ranveer Singh Opens Up About His Favorite Performance Till Now!