by Jogesh Kumar
Reading Time: 2 mins read
A A
1 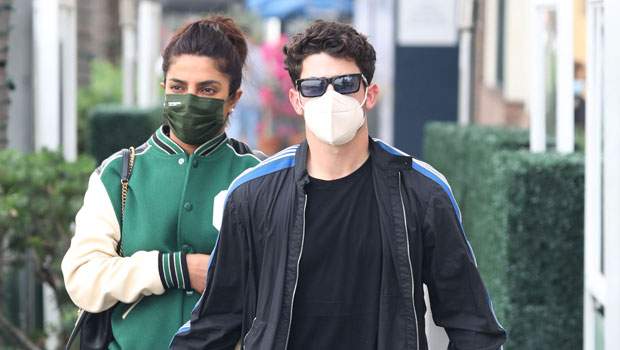 Nick Jonas Updates: Priyanka Chopra and Nick Jonas are the most romantic couple because whenever they are spotted they seem to be holding each other hands.

Now they were spotted near a store on Monday and they were once again holding the hand tightly like a kid doesn’t want to let go someone from his house.

They were married in 2018 while performing the rituals from both religions. As we know Nick Jonas is a Christian and Priyanka Chopra is an Indian Hindu Actress.

When they were seen with each other they were wearing Nick, 29, opted for an all-black ensemble (with the exception of the blue stripes running along his sleeves) and some Converse shoes, while Priyanka, 39, wore a green varsity jacket with white sleeves and black ripped jeans.

Nick Jonas has two brothers Joe Jonas and Kevin Jonas and they together run Jonas Brothers. All of the brothers are happily married Joe’s wife is Sophie Turner and she is pregnant now and is prepared to deliver a baby.

Priyanka Chopra always shares everything about their festive in which she said “One of the most special things that our relationship has given us is a merging of families who love and respect each other’s faiths and cultures,” she wrote.

She added, “Once again we made it our own and it was an afternoon that kicked off the celebrations in the way we both dreamed.”
She also said about the age and cultural gap between their marriage on which she said “Neither was a hurdle,” revealed.

She also revealed that coronavirus lockdown had been a blessing for them. “Quarantine gave us the ability to spend a lot of time together, which I’m really blessed by,” she said. “Because with both of our careers it’s hard to find that kind of time.”