Fall Guys Updates: Fall Guys : Ultimate Knockout has been competing with Fortnite for the most epic crossovers for a long time. Just recently they released a teaser of their crossover with Super Bomberman R on Twitter and this epic event is finally here.

Both games are releasing special edition character skins from the other title, with Super Bomberman R Online already having done it. Fall Guys will release in on June 4.

Over the past year, Fall Guys have brought in a number of amazing character skins from different games. Shovel Knight, DOOM, Godzilla, and Among Us have all entered the obstacle-style game.

Quite naturally, users have loved this influx of their favorite characters from different worlds. More is yet to come, as Fall Guys is set to add another skin for players to collect. But what has really got the users excited is seeing their epic jelly bean head over to Super Bomberman world.

It was confirmed on Twitter that this epic collaboration is to start on May 28th. Fall Guy ‘s  character being available on Super Bomberman R is set to start the event. Moreover, Bomberman’s character is also set to be added as a skin on the other side on June 4th. Developers Konami were quick to announce,

“That bean looks great with a pom-pom. Bean Bomber” is available NOW in Super Bomberman R Online. Get yours and cause some chaos.”

The character looks solid to cause some serious chaos in Super Bomberman R ‘s battle royale as 64 players go on and on to be last man standing.

On the other hand, users of Fall Guys will be able to purchase Bomberman skin for their crowns collected in-game. This looks like a great attempt as they catch up with Fortnite to have the best team-ups in business.

Fall Guys’ team up with a variety of indie games has served both sides well. The crossovers are loved by it’s audience as they’re also  introduced to these other games they didn’t know about.

The title’s popularity turns it into a win-win situation for all and so seems to be the case for this crossover as well. Players hope that maintains it’s  streak of teaming up with other indie games as much possible. 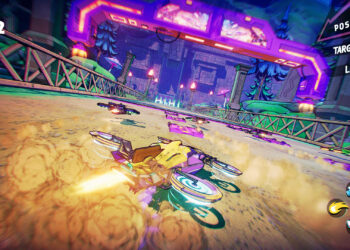