Kylie Jenner was seen in a beautiful gown at Paris Fashion Week after revealing the face of her baby boy! 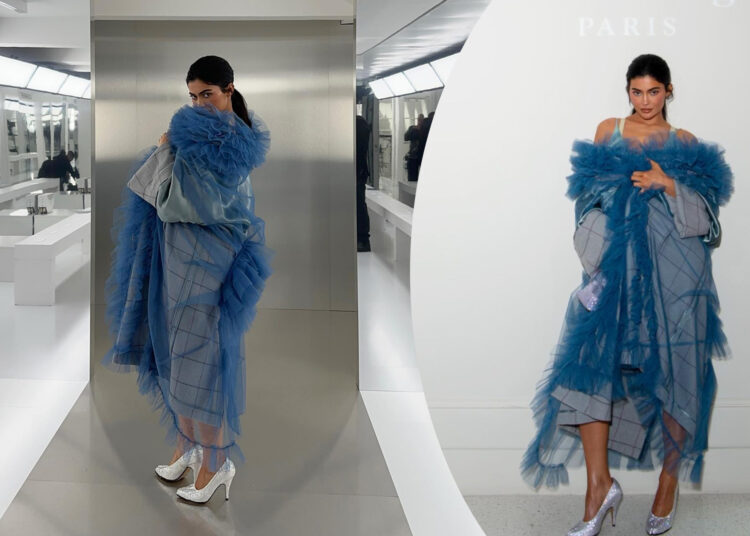 Kylie Jenner was looking very beautiful in a blue gown while arriving at Paris Fashion Week. It is already a year of fashion even though the first month has yet not passed. We have seen a lot of celebrities coming up with unique fashion that was never seen before and at the same time very comfortable for the body.

Talking about such things then we cannot forget about some of the fashion week or fashion shows which enlighten themselves with the presence of some celebrities. If we talk about any such show then the recent one is Paris Fashion Week.

It was Kylie Jenner who appeared at Paris Fashion Week with her amazing dress. She was looking beautiful on 22 January 2023 while arriving in a blue jacket gown. She was also having a lavender-colored bag with some kind of tulle material. She kept her hair tied in a ponytail which was quite simple according to the look.

If we talk about her makeup then it was very glowing and somewhere natural. She was looking very beautiful and ready to take the stage.

This is the first-ever appearance of Kylie Jenner ever since she announced the name as well as revealed the face of her second baby. It was through Instagram that the reality star decided to reveal the name before anyone else can do it.

Here you can check out some pictures of Kylie Jenner from Paris Fashion Week.

At first, the baby was named Wolf however, it was, later on, dropped as the name was not suiting the baby. When it comes to the second name that went public then it is his official name called Aire.

It is almost 1 year since the birth of a baby boy. Kylie Jenner has welcomed a baby boy with her ex-boyfriend Travis Scott. The couple was at that time together however, the separation happened recently. They also share a four-year-old daughter named Stormi who is again very beautiful and cute.

Stormi is very much well-known for her dressing sense and the same is going to be there with Aire as he was seen in a very comfortable and fashionable attire. The baby was not just looking cute but his overall outfit was also looking very adorable.

As soon as Kylie Jenner uploaded the picture of her son, a lot of fans started commenting and revealing how they are not able to believe it. Some said that the baby looks like her while others appreciated his uniqueness.