JUNG_E Ending Explained: All That We Know So Far!!!

When Yun Seo-hyun learns that the JUNG_E project will be scrapped since the Adrian Republic and Allied Force have agreed to put an end to the conflict. 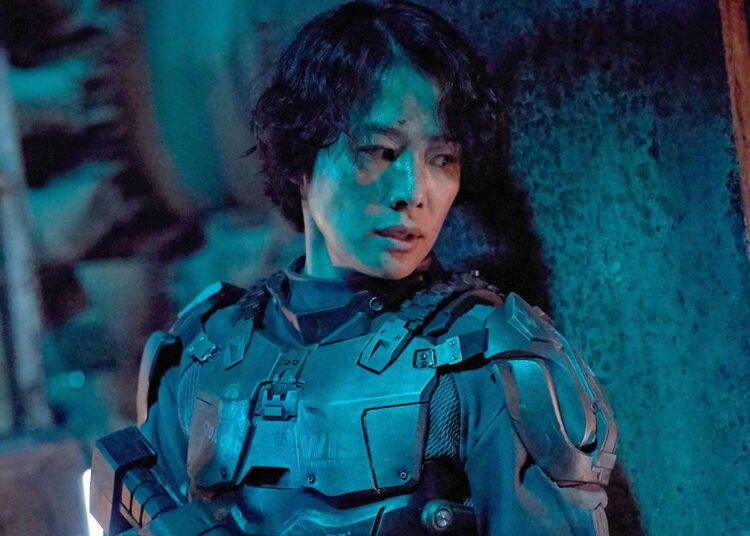 Finally, the day that we have all been anticipating has arrived. The latest science fiction film, JUNG_E, can now be streamed on Netflix, and viewers are delighted about it. This new sci-fi thriller film, directed by Yeon Sang-Ho, is the first Netflix original film he has produced.

The directing work that Sang Ho did on the films Peninsula and Train to Busan is what brought him the most notoriety. The roles of JUNG_E, Seo-Hyeon, and Sang-hun are all played by Kim Hyun-Joo, Kang Soo-Youn, and Ryu Kyung-soo, respectively, in the film.

The movie is set in the 22nd Century when global warming has rendered Earth uninhabitable and forced people to live in manmade constructions. The efficiency of the famed robot mercenary’s brain-cloning technology will determine how internal conflict develops.

Peninsula, Train to Busan, and Hellbound are just a few examples of how director Yeon Sang-ho has rethought the trajectory of Korean cinema going forward. He focuses on the essential concepts of brain cloning and human-like mercenary robots in this movie.

The audience was left perplexed by this science fiction film’s conclusion. We can surely give you more information if you’re interested in learning more about the movie’s closing moments. So let’s explore it.

JUNG_E Ending Explained: All That We Know So Far

When Yun Seo-hyun learns that the JUNG_E project will be scrapped since the Adrian Republic and Allied Force have agreed to put an end to the conflict, she is disappointed by the fact that all of her efforts have been in vain. She is instructed to finish the combat AI project by Kronoid’s chairman because the company will now concentrate on housekeeper or service worker AIs.

The first robot the chairman created using his brain data, Kim Sang-hoon, who is also the lab director at Kronoid, receives the message later from the chairman. Yun Seo-hyun instructs the other Kronoids employees to leave it to her when it comes time to prepare a new Captain Yun robot for one final simulation.

But rather than preparing Captain Yun, she disables the administrator control so that Captain Yun can work independently. She also erases the majority of Captain Yun’s brain’s yellow unidentified region so that she has no memory of her. However, before she starts Captain Yun’s engine, she gives her instructions on what she should do when she comes to.

Captain Yun completes the last step of the simulation. But unlike the previous simulations, she secretly avoids a bullet and acts as if she has been hit. The Kronoid personnel attempt to bring Captain Yun to a room to kill her after determining that another simulation has failed, but she fights them and manages to flee.

Finally realizing that Captain Yun has been changed, Kim Sang-hoon activates the emergency alarm and dials the police.

Yes, but not without facing a number of challenges. Kim Sang-hoon activates the new AIs and orders them to attack Captain Yun as she moves through the Kronoid structure, looking for a way out. He is also looking for her.

Captain Yun gets into a fierce fight with the other AIs and sustains serious injuries as a result. Yun Seo-hyun intervenes, though, and saves her. Captain Yun, however, is injured and instantly recognizable, so it’s unlikely that she will be able to see. Yun Seo-hyun steals Captain Yun’s brain and implants it in a new AI because she is aware of this.

They are able to avoid being discovered in this way. The police robots eventually show up and destroy the outdated Captain Yun robot. But when they notice that her brain is missing, they immediately recognize that it’s not the real Captain Yun.

Yun Seo-hyun and the genuine Captain Yun, meantime, have exited the Kronoid structure and are boarding a train. Yun Seo-hyun instructs Captain Yun to flee from Kronoid as far as she can when the train stops while they are still on the train. Kim Sang-hoon announces his presence on the train as she is still speaking.

Captain Yun tries to shield Yun Seo-hyun as he points his gun at her. Kim Sang-hoon is then informed by Yun Seo-hyun that she has destroyed Captain Yun’s memory of her in order to be free.

Kim Sang-hoon gets infuriated by this and shoots Yun Seo-hyun in the chest or shoulder. Following this, Captain Yun gets into a fight with Kim Sang-hoon, which ultimately results in Kim Sang-hoon discovering that he is a robot.

Where Can You Watch JUNG_E?

JUNG_E is currently available to stream in its entirety on Netflix.