Kaleidoscope, a clever new heist-thriller from Netflix, continues the concept of pretended reality. In the program, a gang of robbers makes an attempt to break into a vault containing enormous amounts of bearer bonds. 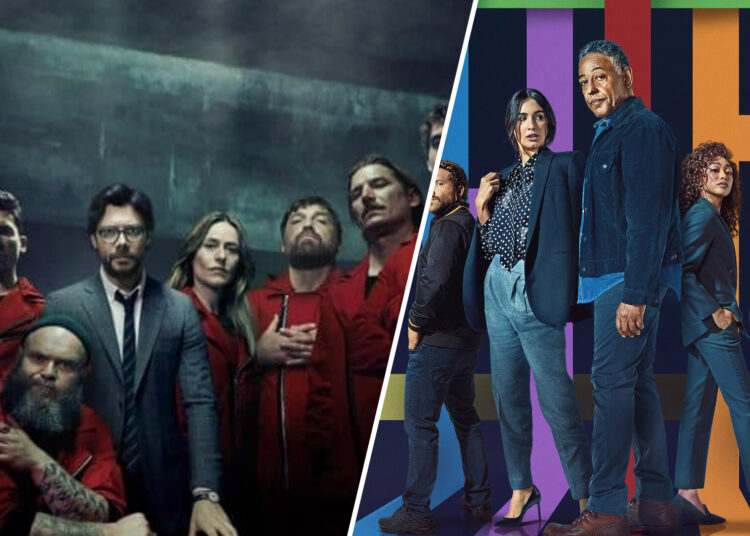 Netflix is no stranger to heist shows, as evidenced by Money Heist and Kaleidoscope, two shows that center on the characters’ attempts to carry off the century’s biggest heist in the hopes of making millions in the process.

If you fall into a particular audience category, the premiere of the new drama Kaleidoscope on Netflix is sure to have piqued your interest. That is due to the fact that Kaleidoscope is nothing less than a revolutionary new approach to storytelling.

Money Heist, on the other hand, is without a doubt a fan favorite because of how intense and dramatic it can be. The intensity of the heist was great from the beginning to the end, and dramatic and intense scenes have always been a mainstay of Spanish tv programs.

If you are curious to know about which show among Kaleidoscope and Money Heist is the biggest heist, then read this article till the end.

Money Heist and Kaleidoscope both have a lot of great qualities, so you can watch both of them without necessarily disliking one of them. But as of right now, we do think that Money Heist is the superior heist series to Kaleidoscope.

However, it is perfectly acceptable to choose one over the other because they are both excellent shows that you can enjoy without criticizing the other.

Millions of people throughout numerous nations have fallen in love with Money Heist. With almost 34 million viewers in the first week of its third season, it was really among the most-watched television programs in the entire world. It is a popular television series for a number of reasons in a world with several millions of people. One reason is that the US has given it a high rating. The film is an artistic marvel.

Author Eric Garcia’s unique heist drama, Kaleidoscope, is unique in its genre. There are eight distinct episodes in the series. Every person with a Netflix account sees the first seven episodes in a different order.

For the finest experience, it is advised to watch the final episode, “White,” last. You will see a display of the full theft in this episode. Each episode has a title that is paired with a color or hue that directly connects to the focal point of that specific episode. The plot spans a significant amount of time, from 25 years prior to the crime to 6 months following it.

Reasons For the “Money Heist” To Be A Famous TV Series.

Money Heist was reportedly thoroughly and cleverly developed, which is one of the factors that attract many enthusiasts to it. Its focus on a man known as the Professor and the various strategies he painstakingly devised to carry off the theft of the century is, of course, the reason it appears to have been extremely smartly written.

The events that occurred during the heist itself were consistent with the Professor’s predictions, suggesting that everything he planned was calculated.

Money Heist is a popular television series for a variety of factors. Although the show is realistic, there is a hint of risk, which adds interest rather than a smooth heist. Each episode is a heart-pounding, thrilling experience.

The robbery narrative is so intricate and convoluted that it holds viewers’ attention all the way to the conclusion. Money Heist boasts a fantastic cast, which adds to the show’s intrigue and appeal.

The robbery plot is also intricate and captivating, which makes it simple to relate to. Money Heist is so interesting because each episode has a variety of unexpected turns. Because of this, viewers of all ages find the show to be enthralling. Furthermore, it’s ideal for households with kids that enjoy crime.

Kaleidoscope, a clever new heist-thriller from Netflix, continues the concept of pretended reality. In the program, a gang of robbers makes an attempt to break into a vault containing enormous amounts of bearer bonds. To encourage users to approach the series from a different perspective than their streaming peers, viewers are each given a different order to watch the episodes.

Netflix has made it clear to viewers in advance that the Giancarlo Esposito-starring series was based on true events that took place on Wall Street in 2012 after Hurricane Sandy, possibly because the story sounds so fantastical and impossible.

The characters commit murders out of retaliation for slights that grow into betrayals. The act of stealing money is essentially irrelevant. In this approach, Kaleidoscope avoids attempting to formulate any theories regarding the actual Wall Street flooding.

Instead of giving life to those who attempt large-scale crimes, it functions as a pleasant and thrilling fictionalized version of a narrative that vanished very fast after it happened.