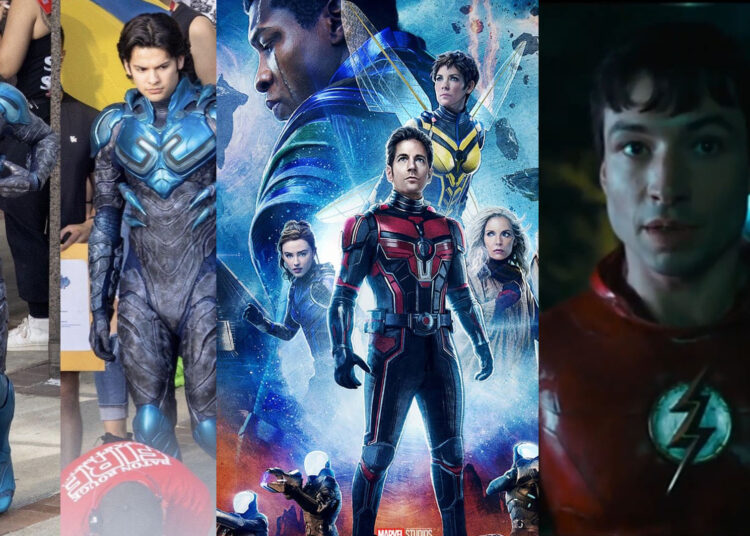 There Top 10 Superhero Films are waiting for you to Watch in 2023. The year 2023 is going to be a blast if we look at the number of superhero movies that are released this year.

Not even the first month has passed and we already know the names of a number of DC Comics and Marvel Comics-based films. This article has listed the names of those films for the viewers to add to their watchlist.

Aquaman and the Lost Kingdom-

This upcoming superhero movie is based on the titular DC Comics character. It will be serving as the fifteenth film of DC Extended Universe and the sequel to the 2018 movie ‘Aquaman‘.

James Wan has directed this movie in which Jason Momoa will be reprising his role of Arthur Curry aka Aquaman from the previous movie. The role of Mera will also be reprised by Amber Heard in the upcoming movie.

Other cast members include Patrick Wilson, Willem Dafoe, Nicole Kidman, Dolph Lundgren, etc. The film is scheduled to be released on December 25, 2023, in the United States.

Ant-Man and the Wasp: Quantumania-

This upcoming superhero movie is based on the titular characters of Marvel Comics and is intended to be the thirty-first film of MCU and the sequel to the 2015 movie ‘Ant-Man‘ and the 2018 movie ‘Ant-Man and the Wasp‘.

Paul Rudd and Evangeline Lilly will be seen reprising their roles of Scott Lang aka Ant-Man and Hope van Dyne aka Wasp respectively. It will be released as part of MCU’s Phase Five on February 17, 2023.

Guardians of the Galaxy Vol. 3-

Spider-Man: Across the Spider-Verse-

This upcoming computer-animated superhero movie is the sequel to the 2018 animated movie ‘Spider-Man: Into the Spider-Verse‘.

The plot of this film is set in a shared multiverse made up of a number of alternate universes known as “Spider-Verse” and will revolve around Miles Morales aka Spider-Man embarking upon an adventure across the multiverse with the Spider-Force that consists of a new team of Spider-People.

This upcoming superhero movie will serve as a sequel to the 2019 movie ‘Captain Marvel‘ and the continuation of the 2022 series ‘Ms. Marvel‘.

Brie Larson and Iman Vellani will be seen reprising their roles of Carol Danvers aka Captain Marvel and Kamala Khan aka Ms. Marvel respectively.

This upcoming superhero movie is based on the same named character of DC Comics and will serve as the thirteenth installment of DCEU.

The plot revolves around Barry Allen aka The Flash traveling back in time to prevent the murder of his mother drawing unforeseen consequences.

Ezra Miller will be seen reprising the titular role in the movie that is set to be released on June 16, 2023.

Shazam! Fury of the Gods-

This upcoming superhero movie will serve as the sequel to the 2019 movie ‘Shazam!’ and the twelfth installment of DCEU.

The plot is centered around the war of Billy Batson aka Shazam and the family of teenage heroes under his leadership with the Daughters of Atlas.

Zachary Levi will be seen reprising his role of Shazam in the movie that is set to premiere on March 17, 2023.

This is another upcoming superhero movie based on a Marvel Comics character. The plot will find a Russian immigrant named Sergei Kravinoff who embarks upon the mission of proving himself as the greatest hunter in the world.

Aaron Taylor-Johnson will be starring as the titular character in the movie that will be released on October 6, 2023, in the United States.

This upcoming superhero movie is based on Jaime Reyes aka Blue Beetle, another DC Comics character.

Xolo Maridueña will be seen starring as the titular character who is a teenager gaining superpowers after an alien Blue Beetle scarab grafts onto him. The movie will be released on August 18, 2023.

This upcoming computer-animated superhero movie will serve as a reboot of the Teenage Mutant Ninja Turtles movie franchise and its second theatrical animated entry.

The movie will be released on August 4, 2023, in the United States.