List of the must-watch horror movies that are releasing in the year 2023. 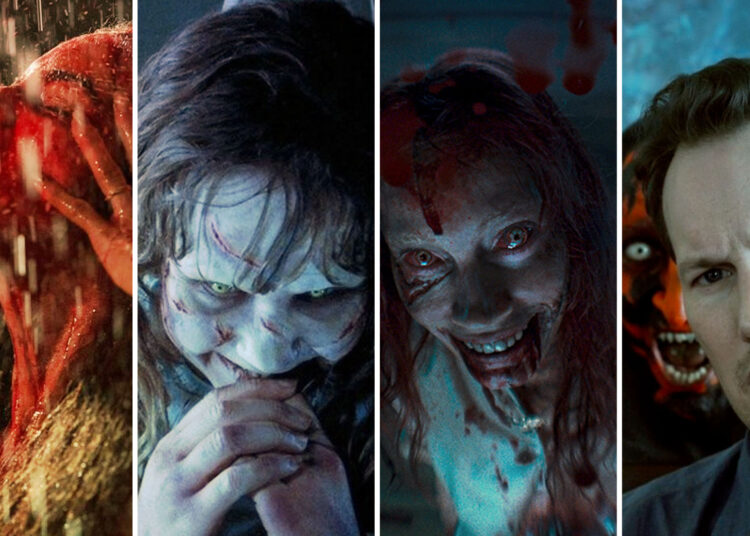 Yet, we can’t really resist the lure of the genre of horror be it the end or the beginning of the year. This is why the article will walk you through the most important horror movies that are arriving in the year 2023.

Jon Wright has directed this upcoming folk horror movie. The story is about a couple moving into a rural area of Ireland in order to escape their nightmarish urban place.

But here they learn about the mysterious creatures living in the ancient woods at the end of their garden who come to rescue if called for in dire needs but demand a dear price for that aid.

The movie is set to release on January 27, 2023, in Ireland and the United Kingdom.

Knock at the Cabin-

M. Night Shyamalan has directed this upcoming apocalypse psychological horror movie adapted from Paul G. Tremblay’s 2018 novel ‘The Cabin at the End of the World.

The plot revolves around a family of a young girl and her parents who find their vacation at a remote cabin in the woods turned into a nightmare when four armer strangers take them hostage and force them face to face with an unthinkable choice. The movie is set to release on February 3, 2023, in the United States.

Winnie the Pooh: Blood and Honey-

This upcoming movie is an independent slasher film and serves as a horror retelling of the famous books Winnie-the-Pooh by A. A. Milne and E. H. Shepard.

The plot presents Winnie-the-Pooh and Piglet who now is feral and bloodthirsty serial killers after their abandonment by Christopher Robin terrorizing a remote house now grown-up Robin and a number of young women. The movie is set to release on February 15, 2023.

This is an upcoming slasher movie that will serve as the sixth installment of the Screen film series as well as a direct sequel to the 2022 movie ‘Scream‘.

The plot surrounds the four survivors of the original Ghostface murders who are on the journey of leaving Woodsboro behind to start anew. The movie is set to release on March 10, 2023.

This monster fantasy horror movie is about Bram Stoker created renowned henchman of Count Dracula who is seen to wonder how his life would turn out if he had not had his dark bloodthirsty master to serve, but love to follow.

Nicholas Hoult will be seen playing the role of Renfield in the movie with Nicolas Cage portraying Count Dracula.

Lee Cronin has directed this upcoming supernatural horror movie that serves as the fifth movie of the Evil Dead film series.

The plot surrounds two sisters struggling to survive after bloodthirsty demons known as Deadites emerge from an ancient book and begin to run amok causing panic and terror in an apartment building in Los Angeles.

Alyssa Sutherland and Lily Sullivan will be seen playing the roles of the two sisters in the movie. It is set to release by Warner Bros. Pictures on April 21, 2023, in the theatres.

Michael Chaves has directed this upcoming gothic supernatural horror movie that is the direct sequel to the 2018 movie ‘The Nun‘ and the ninth installment of the films set in The Conjuring Universe.

The plot of this movie will be set in 1956 France when evil spreads after the murder of a priest as Sister Irene again finds herself fighting the demonic force Valak, known as the Nun.

Taissa Farmiga will be seen portraying her role as Sister Irene in this upcoming movie too. It is set to release on September 8, 2023, by WB Pictures.

David Gordon Green has directed this upcoming supernatural horror movie which will serve as part of The Exorcist franchise adapted from the same named 1971 novel by William Peter Blatty.

It is intended to be a direct sequel to the 1973 film adaptation of William Friedkin, the first movie to be adapted from the novel.

The plot will find the father of a possessed child seeking help from a man named Chris MacNeil who has a similar experience. The movie is set to release on October 13, 2023, in the United States.

This upcoming horror movie is the tenth installment of the Saw movie series. The plot of this movie is not yet declared.

But the announced cast members include Tobin Bell reprising his role as the antagonist John Kramer aka Jigsaw, Synnøve Macody Lund, Steven Brand, Michael Beach, etc. The movie is set to release on October 27, 2023.

This is a supernatural horror movie serving as the fifth installment of the Insidious film series. The plot revolves around Josh Lambert and his son Dalton as they find themselves inside a nightmare as Dalton’s repressed demons of the past reemerge to haunt them.

Ty Simpkins and Patrick Wilson have starred as Dalton and Josh respectively in the movie that is set to release on July 7, 2023.