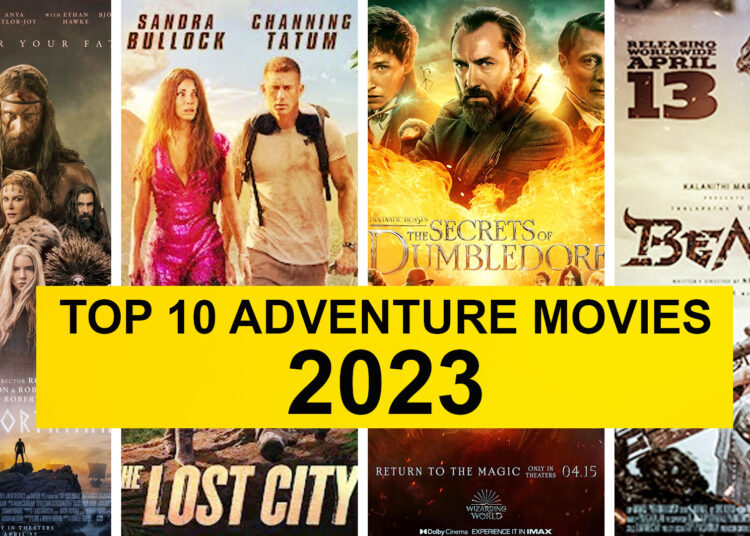 Top 10 Adventure Movies of 2022: From Netflix to Amazon Prime Video, from theatre to film festivals, the year 2022 gifted us with a number of movies from different genres. Though sci-fi, psychological thriller, and fantasy are the predominant genre in the twenty-first century, adventure has always been there as a popular theme to entertain viewers.

Maybe people are so attracted to an idea of a quest because in reality they are mostly trapped in their offices in front of their laptops. Hence, the demand for adventure movies are more than ever.
Following is the list of films that you will definitely like if you’re thrilled about adventures.

The first film on the list depicts an adventure inspired by Norse Mythology. It is an epic historical action thriller movie that deals with the legend of Amleth as Prince Amleth begins his journey to avenge his father’s death and his mother’s abduction by his uncle.

Alexander Skarsgård portrayed the Viking prince Amleth co-starring with Nicole Kidman and Anya Taylor-Joy in the movie that was released on April 22, 2022, in the United States by Fx.

This is an action-adventure romance movie the plot of which revolves around a fictional writer named Loretta who finds her real life being turned into a dangerous adventure on a doomed island where she was abducted.

Sandra Bullock portrayed Loretta in the film co-starring with Channing Tatum, Daniel Radcliffe, and Brad Pitt. It released on March 25, 2022, in the United States.

Fantastic Beasts: The Secrets of Dumbledore

This fantasy adventure movie marks the third installment of the Fantastic Beasts film series and the eleventh film of the Wizarding World franchise. It serves as a sequel to the 2018 movie ‘Fantastic Beasts: The Crimes of Grindelwald’.

The movie further probes into the mission of taking down Gellert Grindelwald led by Albus Dumbledore with the help of Newt Scamander and the kind of relationship Dumbledore had with the evil wizard in the past. Eddie Redmayne, Jude Law, Ezra Miller, and Mads Mikkelsen are some of the primary cast members of the movie. It was released on April 15, 2022, in the United States.

The plot takes Nemo, a little girl, into the titular world of dreams where she embarks upon a number of adventures through dreams and nightmares in the hope of meeting her late father with an eccentric outlaw Flip beside her. Marlow Barkley portrayed Nemo with Jason Momoa in the role of Flip. The movie will be released on November 18, 2022, on Netflix.

Ruben Fleischer directed this action-adventure movie. The plot revolves around a lost fortune that two groups of people want to claim.

Nathan Drake (Tom Holland) is recruited by Victor Sullivan (Mark Wahlberg) to find that treasure that once belonged to Ferdinand Magellan and Santiago Moncada (Antonio Banderas) wants to make the treasure his own. The movie was released on February 18, 2022, in the United States.

Jung Byung Gil directed this South Korean movie. The plot revolves around a man who has lost his memory but can hear a mysterious voice directing him.

Guided by that voice, he embarks upon a dangerous mission of rescuing hostages. Joo Won portrayed the titular Carter Lee in the movie. It released on August 5, 2022, on Netflix.

The plot of this film revolves around Dr. Nate Daniels traveling to a South African game reserve with two teenage daughters to heal their wounds caused by his wife’s death.

But when a lion with a survival history begins to stalk them, their journey turns into a survival mission. Idris Elba portrayed Dr. Nate Daniels in the film that was released on August 19, 2022, in the United States.

The Pirates: The Last Royal Treasure

The plot of this South Korean action-adventure movie surrounds the exciting and dangerous adventure of a crew of Joseon pirates and bandits through storms and militant rivals while solving clues to reach their mission.

This is a historical adventure movie which is based on the 1909 polar expedition of Denmark. The plot follows two men searching for a lost map in Greenland. ‘Game of Thrones’ fames Nikolaj Coster-Waldau stars in the movie with Joe Cole, Charles Dance, and Heida Reed. The movie released on March 2, 2022, on Netflix.

Roar Uthaug directed this Norwegian monster movie the plot of which surrounds a group of heroes who are on a mission to defeat an ancient troll that has awakened in a Norwegian mountain causing much havoc. The movie will be released on December 1, 2022.