In October 2021, at the Hollywood premiere of Marvel Studios’ new film, Eternals, Shiloh was there with her mom Angelina Jolie.

by Debparna Pal
Reading Time: 4 mins read
A A
0 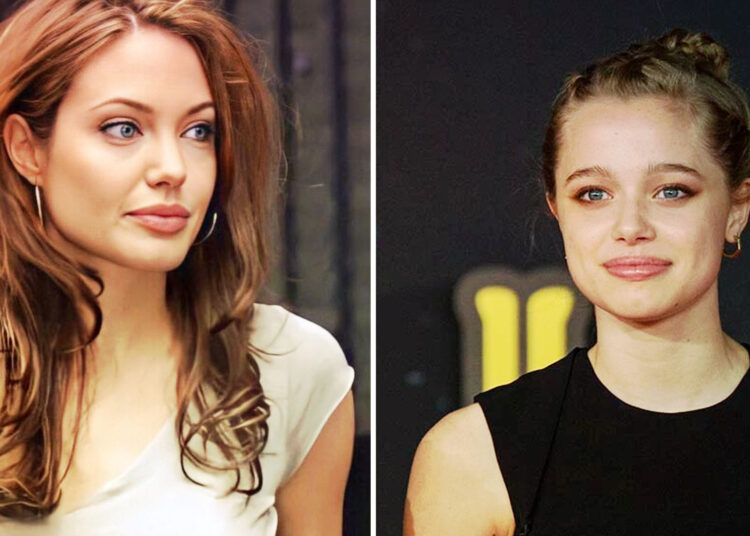 Angelina Jolie is an American actress, and film producer who got recognition for her roles in Girl, Interrupted, for which she earned an Academy Award for Best Supporting Actress.

Changeling, for which she received an Academy Award for Best Actress nomination. She also voiced Lilo in DreamWorks‘ Shark Tale And Master Tigress in theKung Fu Panda franchise.

Recently Shiloh is giving tough competition to her mother Angelina Jolie. Check out how.

Shiloh Jolie-Pitt has been seen following in her famous mom Angelina Jolie’s footsteps, based on casual yet outshining looks.

The teenager, who is known for her outstanding dancing skills, was recently seen with a buzz haircut which is exactly identical to the one Angelina Jolie had in the year 1997 for the movie Gia.

Shiloh was seen while she drove to her local pet store for a bag of organic dog treats ahead of Christmas Eve, with her shaved hair while wearing a sweatshirt and jean shorts.

In October 2021, at the Hollywood premiere of Marvel Studios’ new film, Eternals, Shiloh was there with her mom.

It was seen that the teenager color-coordinated with Angelina, her mother, who was wearing a neutral-colored dress. While Shiloh has been compared to her father Brad Pitt in the past, Twitter users were commenting on the teen’s resemblance to Angelina.

On Friday, March 4, the actress Angelina Jolie and her daughter Shiloh were spotted on a shopping trip in Los Angeles. They kept their looks low key but Angelina Jolie still kept her casual chic look.

“The 47-year-old was bundled up in a long black shawl, which she paired with some slick black sunglasses and a matching facemask while they walked.