Pete Davidson and Emily Ratajkowski Broke-Up After One Month of Dating!

Pete and Emily began dating in November of this year, following Davidson's split from Kim Kardashian and Ratajkowski's divorce from Sebastian Bear-McClard. 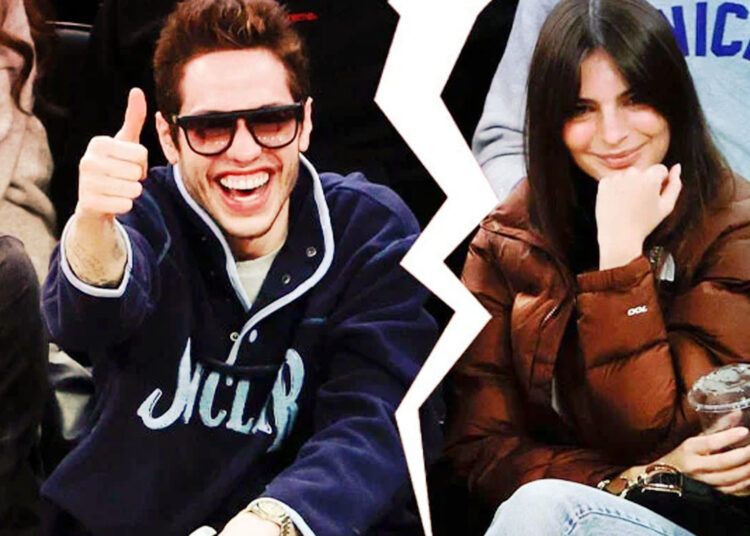 Pete Davidson and Emily Ratajkowski reportedly split up a month after the latter left Brad Pitt for him.

The controversy that has engulfed Pete Davidson in the last year has completely moved attention to his personal life. For the greater part of the year, the Saturday Night Live star has been in the spotlight for his relationships and how they ended, most notably for his newest affair with model Emily Ratajkowski.

But, just when it seemed like everything was coming into place for Davidson, the devil broke loose again, as the two have apparently split up.

Pete and Emily began dating in November of this year, following Davidson’s split from Kim Kardashian and Ratajkowski’s divorce from Sebastian Bear-McClard. In the midst of it all, there was Brad Pitt, with whom Emily was briefly associated in October. According to reports, the model abandoned the Babylon actor for the SNL host.

Pete Davidson and Emily Ratajkowski Split After One Month of Dating.

Emily Ratajkowski, 31, of Hollywood, has allegedly split up with her 29-year-old lover Pete Davidson. Before dating each other, Pete was in a nine-month romance with prominent Hollywood actress Kim Kardashian, while Emily was in a relationship with Brad Pitt. The splitting up of Emily and Pete has now begun to trend on social media.

But it appears that all of the turmoil was for a one-month romance that has since terminated. According to Hollywood Life, the affair between Pete Davidson and Emily Ratajkowski has moved to the friend zone, and despite calling it quits, the two do not have any bad blood between them. Rather, the study states that they are OK with it.

Pete Davidson and Emily Ratajkowski were first seen together on a date in New York City on November 16. They were spotted together in a Brooklyn apartment building.

Their breakup became public after it was revealed that they were not exclusive during their romance. Emily was supposed to be exploring her single life, and her statements a few weeks ago confirmed that.

“Emily is exploring single life, but it has no influence on her bond with Pete,” a source close to the two told the aforementioned site. She thinks he’s fantastic; she simply isn’t ready to commit right now. They’re still communicating, but it’s not exclusively.”