Millie Bobby Brown is either back on vacation or uploading a flashback since she uploaded a photo of herself in a bright red bikini to celebrate Christmas.

by Shreya Singh
Reading Time: 5 mins read
A A
0 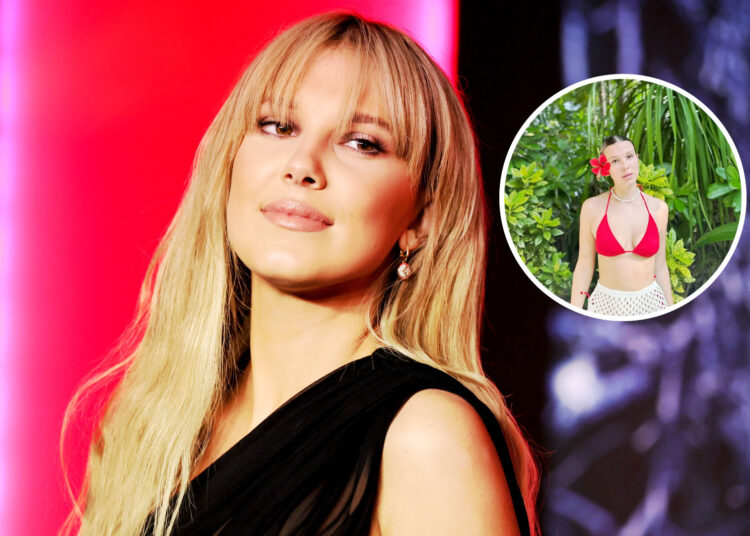 Millie Bobby Brown made a statement during the holidays in a fiery red string bikini that screamed Baywatch.

And where did the Stranger Things star go to flaunt her stunning appearance? Of course, Instagram! She went live from the tropics, reminding us that she’s still on the big screen.

The utterly exquisite classic triangle-style two-piece appeared on our feeds on December 25 as part of the Florence by Mills founder’s holiday card-inspired “Merry Christmas” wish shot.

Millie Bobby Brown has been on a tropical vacation with her boyfriend, Jake Bongiovi, for the past two weeks, posting videos and photographs on social media.

According to Radar Online, Brown and Bongiovi returned home for the holidays to spend time with their respective families, so Millie Bobby Brown is either back on vacation or uploading a flashback since she uploaded a photo of herself in a bright red bikini to celebrate Christmas.

Millie’s shirt had a halter neckline that could be adjusted and a tie across the torso. Under an open-weave, high-waisted crochet skirt, a pair of string bikini bottoms with beaded hip ties peeked out.

Though the ‘grid shot cuts off much of her lower half, the asymmetrical hem of the cover-up had knotted elements with tassels flowing down and a ribbed waistline, as seen in a Christmas tree-filtered IG story the celebrity uploaded.

Here you can check out the post of Millie Bobby Brown in Teeny Red String Bikini.

Millie accessorized with a beaded choker necklace, a silver ring, and a red hibiscus flower put in her sleek, pulled-back hair.

The actress Millie Boby Brown shared a snapshot of herself wearing an off-white coverup knit skirt and a red flower in her hair to match her bikini, with a tropical environment in the background.

Fans instantly inundated the post with season’s greetings for Mill and her boyfriend, Jake Bongiovi, who appears frequently in her social media posts.

Fans adored the adorable shot, with the Instagram post receiving over 5.4 million likes at the time of writing.

In the comments, one admirer jokingly said, “Everyone is sharing their Christmas photos with snow or whatever. Millie posted it on the beach.”

Another person stated, “MERRY CHRISTMAS, YOU PRECIOUS GIRL! Have a wonderful day! You’ve earned it. Thank you very much for everything.”

In the comments, several more wished the celebrity a Merry Christmas and Happy Holidays.

Brown also just uploaded an Instagram Story shot of herself kissing Bongiovi on the cheek in a warm locale, implying that the pair returned to vacation after a brief stay home for the holiday.

Going into 2023, the actress is surely enjoying her best life!

In case you haven’t been following up, Millie appears to be enjoying the finest winter ever. MBB recently went on vacation in a crop top after spilling the beans about Stranger Things season 5 and her co-star, Finn Wolfhard.

Earlier in December, the actress debuted new Y2K-inspired items in her Florence by Mills X About You collaboration, after the unveiling of a so-noughties bejeweled hair gem hairdo. Oh, and don’t forget that our gal gave us the lowdown on how to obtain party-ready makeup in time for New Year’s Eve.

Along with performing, Brown recently launched her own skincare and cosmetics line, Florence by Mills, which performed exceptionally well in 2022. She also had a clothes collaboration with About You in December, which was only available for a few weeks.

Brown has a few intriguing projects lined up for 2023, including a princess action picture called Damsel and filming for Stranger Things Season 5.