In Khloé Kardashian's latest Instagram post after Christmas in which for the first time she revealed her baby son's face. 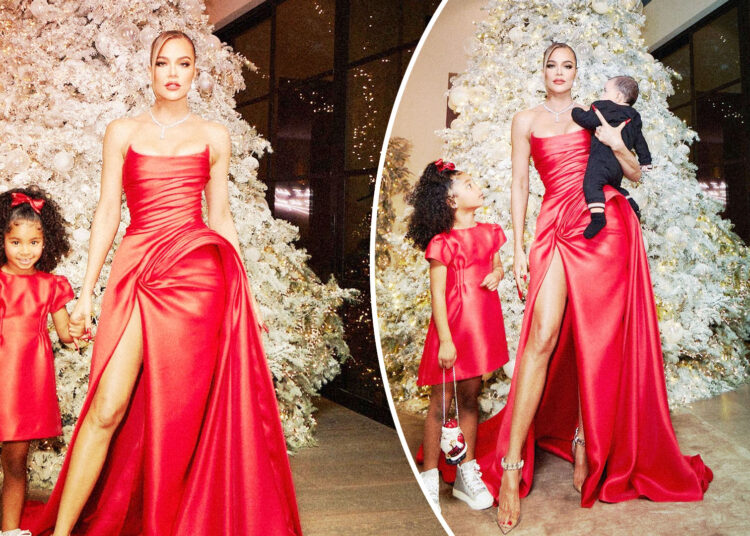 After the KarJenner Christmas Eve Party Khloé Kardashian decided to reveal her baby Son’s Face in her recent post.

The Kardashians had their traditional Christmas Eve event, inviting only their closest pals. The family’s Instagram feeds provided a glimpse into the spectacular red-themed celebration, complete with glam clothes, a “My Snowman and Me” performance by North West, and even a See’s Candies kiosk.

And ofc it wouldn’t be Christmas without photographs of the Kardashians, would it? Khloé Kardashian also gave her followers their first sight of her baby, who was delivered through a surrogate earlier this year. He hadn’t been seen in public until recently, but he made his debut in Khloé’s 2022 family Christmas photos…or, at least, his profile did.

Here you can have a look at Khloe Kardashian’s Son.

In the picture, Khloé Kardashian was seen wearing the strapless red gown with a high slit that she wore to Kourtney Kardashian’s blood-red Christmas Eve party in the photos.

She is cradling her five-month-old boy, the name of whom has yet to be released to the public (much like Kylie Jenner’s kid, formerly known as Wolf Webster).

Posing with her 4-year-old daughter True Thompson, the Good American creator can be seen cradling her almost 5-month-old baby, who is dressed in a black onesie and has his face turned to look at his mother.

Though Khloé’s kid had his Instagram debut on Halloween when he was held by his sister in his Tigger costume, this is the first time Khloé has revealed photographs of her son’s face.

“Merry Christmas,” wrote the mother of two in the caption.

“My babies,” Kim Kardashian responded, and Hulu, the streaming service that airs The Kardashians, wrote, “Happy Holidays to our favorite family.”

Khloé gave birth to her second kid on July 28, 2022, with ex-boyfriend NBA star Tristan Thompson. The Kardashians’ Season 2 debut included the delivery room scene. Except for these little glimpses of her life with her infant, the 38-year-old mother of two has kept her kid hidden from view and has yet to share his name.

Khloé’s son was conceived through surrogacy in November 2021, before news of Thompson’s adultery and paternity controversy with fitness model Maralee Nichols became public. In January 2022, a DNA test revealed that he fathered a kid with Nichols.

We first saw Khloé’s baby in October, when she tweeted a photo of him in a Tigger costume but avoided displaying his face. She also posted a picture of his foot in a shoe. As for his name, the reality star stated it will start with a “T” on the season-two premiere of The Kardashians.

While Khloé and the Chicago Bulls player were almost engaged (Thompson proposed to Khloé, but she declined).

The couple’s on-again, off-again romance will come to a stop in June 2021. Despite their divorce, the athlete apparently volunteered to be the surrogate’s sperm donor, and despite the numerous difficulties surrounding their relationship, Khloé referred to her son as “a lovely gift” in the debut episode of The Kardashians. “I am quite grateful,” she even added.