What Is The Message Behind "Cicadas"? Will Min survive Piotre? 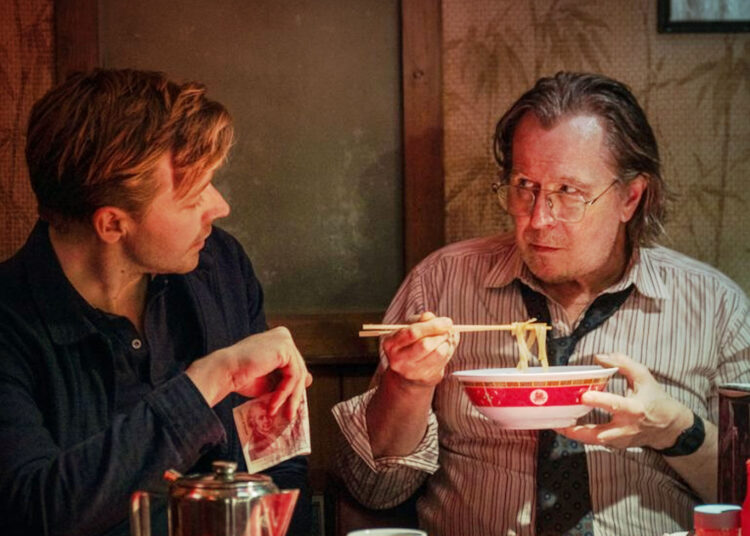 The spotlight stays on the men and women who were all rejected from MI5’s prestigious Regent’s Park headquarters and assigned to the slow & sluggish administrative operations of the Slough House branch.

The primary characters are the group’s commander, Jackson Lamb, and the young agent River Cartwright. In Season 2 of “Slow Horses,” the agents at Slough House are preparing for new spy operations as an old theory about KGB sleeper agents lurking in British society has become very real.

The Slow Horses Season 2 starts with Richard “Dickie” Bough, a former MI5 agent, spotting a man from his past and following him. Bough last saw this man when the Berlin Wall collapsed, but it was a memorable encounter.

He was still working for the agency almost forty years ago when he was kidnapped and tortured. He survived the trauma and recalled every detail.

Bough tracks down the bald man from his past and finds himself on a bus. The driver realizes Bough has dead as the car comes to a stop.

When the story turns to the series’ central heroes, Slough House remains the worst location to work inside the agency, and the workers struggle to find a way out.

River talks with a handful of Chief executives about a career in government, but the interviewers keep pressing him about Lamb. Meanwhile, Webb hires Min and Louisa to protect a meeting with a Russian oligarch who opposes the present leadership in Russia.

As Lamb investigates Bough’s seemingly unremarkable death, he discovers the word “Cicada” scribbled on the dead man’s phone, which leads him to believe that foul play was involved.

As River learned from his grandpa, Cicadas are Russian sleeper operatives named by the fact that, like cicadas, they spend years underground before “hatching.” The MI5 discovered that they were a hoax in the 1980s as the commander, Alexander Popov, came out to be a bogeyman.

However, as River begins to investigate Bough’s death, he rapidly finds that, contrary to what his grandfather told him, things may not be as they look.

Bough was expelled from the agency years ago when he went missing for days and returned drunk, alleging that Popov abducted him and one of the Cicadas and brandy was poured down his neck.

According to the footage Shirley obtained, the bald guy Bough was tailing touched him, and this likely is how he delivered the drug that killed Bough and gave the appearance of a heart attack.

In episode 2, Lamb learns from a Russian agent that he once overheard Popov conversing with someone he knew, Andrei Chemitsky. According to the account, this is the individual Bough followed the night before he died.

Given that this is a sleeper cell that has never been activated, its involvement in the death of a former agent can only imply one thing: they are about to be put to work.

This is the major problem for Lamb, River, and the others. River believes the operatives are KGB rather than FSB. Although his grandfather denies the theory, how Bough was murdered seems to confirm it.

Min will very likely survive. If Piotr had meant to murder him, he would have done it by now. This next meeting is most likely related to the Cicada inquiry, but the Slow Horses are unaware of this. The sleeper cell was probably triggered after all these years to assassinate the regime’s most serious potential challenger in Moscow, Nevsky.