Ben Affleck showed her bonding with the daughter of Jennifer Lopez, Emme, and his own two children at shopping! 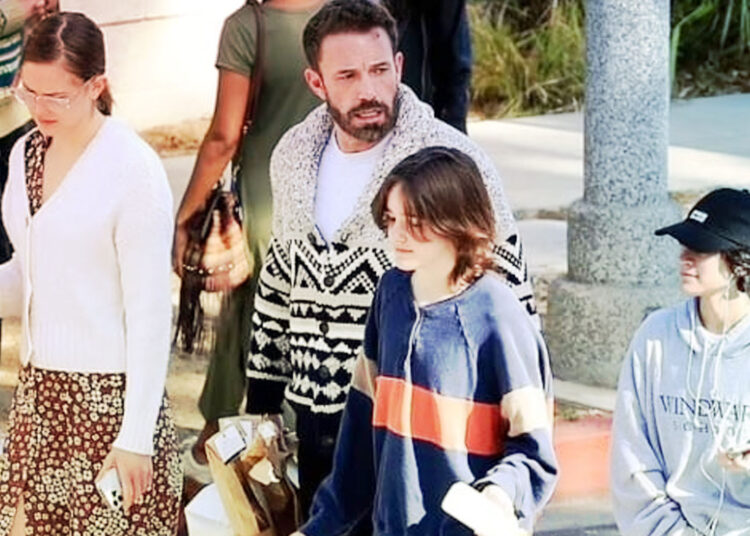 Ben Affleck was recently spotted with his kids and at the Farmer Market in Beverly Hills. We have seen a lot of Hollywood celebrities bonding with each other’s children like never before. Whether it is related to having a shopping time or just a casual outing, we have seen how they have treated the children of their partner as their own.

And the same goes for the children who decided to accept the partner of their parents as their own. Something like this has recently happened as we have seen many modern families hanging out together.

And among them is the actor Ben Affleck who has recently seen bonding with the children of Jennifer Lopez as well as his own.

It was recently when Ben Affleck was seen with the child of Jennifer Lopez while spending some family time with them. This Thanksgiving weekend is going great with the actor who is having a close holiday with the daughter Violet and Seraphina. It was not just two of them but also 14-year-old daughter Emma who was seen with her stepfather.

As per the photos, it appeared that the family was enjoying a really great time shopping. The whole family looked very comfortable in their warm cloth as it is early winter.

Coming to the actor then he was seen wearing a black and white sweater with a white T-shirt. He was seen with some groceries items that he kept in his arm as his kids were walking their way through the farmer’s market.

Here you can check out some pictures of Ben Affleck and Kids At Farmer’s Market!

Coming to the stepchild of Ben Affleck is Emme who was wearing a grey and black shirt while listening to music. Besides looking very happy and full while spending time with their kid, the actor was also having great bonding with his daughters.

Violet was looking super cool as she was wearing a floral dress with a white Cardigan whereas the younger daughter was wearing a blue sweater with an orange stripe and brown sweatpants.

The couple got married in July 2022 and since then, they were continuously seen each other children. They have started a new kind of blend in their family which one can see through the videos and photos uploaded by Jennifer Lopez on Instagram.

It was recently when 14-year-old Emme and Max were seen asleep on the lap of their father Ben Affleck.

Coming to Jennifer Lopez then she has gained headlines through the announcement of her upcoming album. This album is going to be the first one in 6 years as the singer has decided to make a comeback by getting inspiration from her husband.