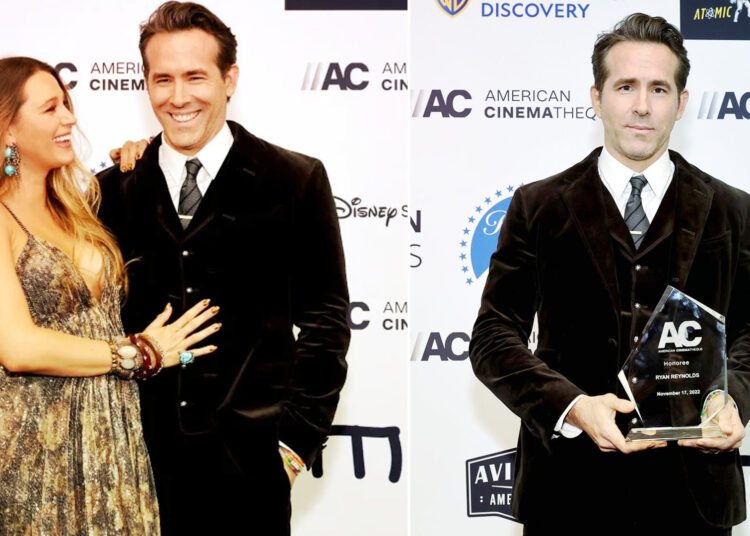 Actor Ryan Reynolds, known by his Instagram name Vancity Reynolds, is a famous actor and owner of mini mobile, aviation gin, maximum effort & Wrexham_afc. With a fan following of 46.4 million people, Ryan Reynolds is one of the most popular celebrities on Instagram.

In his recent post, Ryan Reynolds posted a video of the event American CinemaTheque where he received an award, thanking everyone who made it possible for him.

Here you can check out some pictures of Ryan Reynolds from American Cinema Theque.

In that very post, he posted the video with the caption ” Thank you @AM_cinematheque for this incredible honor.

Thank you to my friends and family who turned me into a heaving, weeping mess of laughter, nostalgia, and joy. It felt like I am in the front-row seat of my own funeral but without all the inconvenient death. What a night….” He ended the caption by thanking his incredible and beautiful wife @blakelively.

In that very post, his wife looked absolutely stunning wearing a dazzling outfit.

Various celebrities have commented on his posts including Gal Gadot, Robbie Feld, Danny Galieote, and so on. The comments and likes on his posts show how people like his posts and appreciate his content. People also are very fond of seeing his relationship with his wife through his posts.

He has also posted a clip of his interview with Jimmy Fallon on Fallon tonight show where he expressed his desire to work with Will Ferrell and his gratitude as it finally happened.

His humble and honest nature is what makes the audience love him the most.