Gal Gadot Shows off Her Long Legs In Short Shorts

Although she's one of the mainstays of the red carpet fashion world, these days Gal Gadot hangs out in her basement and encourages fans to "go green" when she wears the color. 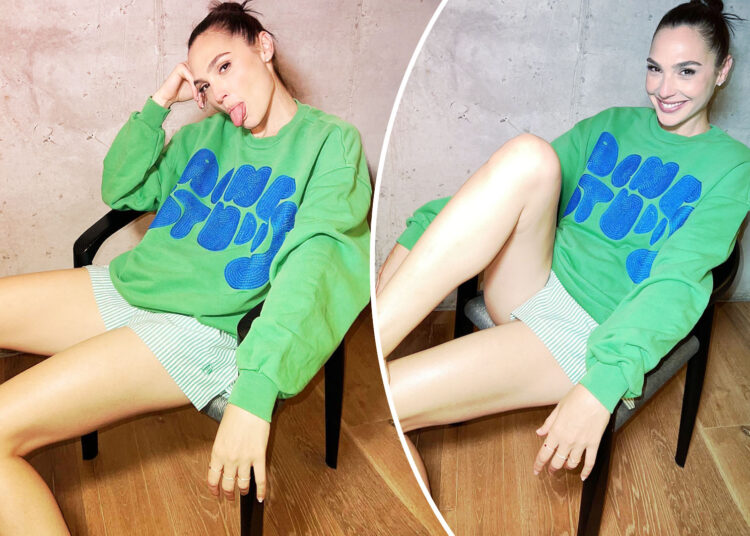 Her latest Instagram update on November 14 was all about the casual look and saw the 37-year-old Gal Gadot rocking a comfy sweatshirt and pajama shorts. Still, it was her endless pins that did the talking, bringing Gadot’s message to her fans, as evidenced by the outpouring of green hearts in the comments.

The Wonder Woman star Gal Gadot added legs for days while posing on a chair. With no makeup and her hair in a bun, she lifted her knee and flashed her million-dollar smile.

Then she went impetuous and stuck out her tongue, finishing the share with an unaffected, carefree stretch. The simple backdrop of bare concrete walls and floorboards accentuated the casual atmosphere of her impromptu photo shoot.

Gal Gadot looked radiant in a green sweatshirt with an electric blue graphic print, which she teamed with white bottoms adorned with jade stripes. She playfully winked at fans via an emoji in the caption and added a green heart to match her eco-friendly message.

Here you can check out Gal Gadot’s Post in Short Shorts.

Mesmerized by her effortless charm, fans took to the comments to let her know she looked “so hot in shorts and sweaters.”

“You’re perfect in green 💚💚💚,” gushed one person, while another shared: “My favorite color and it suits you.”

However, Gadot doesn’t live in formal wear all fall. On October 26, she made a stunning appearance at the launch of the Tiffany & Co. Lock Collection in a fiery red Givenchy braless dress. With a plunging hood and square neckline, the sleeveless number worked perfectly to accentuate her slim figure.

Sharing laughs with Adria Arjona (Morbius) and Zoë Kravitz (The Batman) at what we’ve decided to imagine as a DC-Marvel reunion, Gadot posed poolside with Kim Kardashian and Hailey Bieber against a nighttime backdrop lit by glowing Tiffany & Co. signs.

Gadot spoke about her personal connection to the luxury jewelry brand in an interview with Vogue. “As a young Israeli girl, I was first introduced to this iconic brand after watching Breakfast at Tiffany’s,” she said. “When I’m choosing a piece of jewelry, I’m always looking for something timeless or something that has an edge to it.”

The model-turned-movie star detailed her relationship with jewelry: “To me, jewelry is something that you keep forever, more than a dress or a bag or whatever it might be. So I’m mostly looking for pieces that I connect with and which I know will never go out of style.”

Just one day earlier, Gadot appeared at Veuve Clicquot’s Solaire Culture Exhibit and served up style in a figure-hugging Michael Kors dress. She took a walk on the wild side with a zebra-print midi, accessorized flawlessly with a black clutch that matched both strappy heels and nail polish.

In photos with Marvel stars Gwyneth Paltrow and Laura Harrier (if you’re looking for a Marvel connection, she was in Spiderman: Homecoming), she sported a slinky dress and rocked side waves in a ’60s-inspired style.

Winged eyeliner completed the look, which was accessorized with silver drop earrings and an industrial helix piercing. Who says you can’t do vintage and modern at the same time?