Omega X Held A Press Conference, Talked About the Issue. 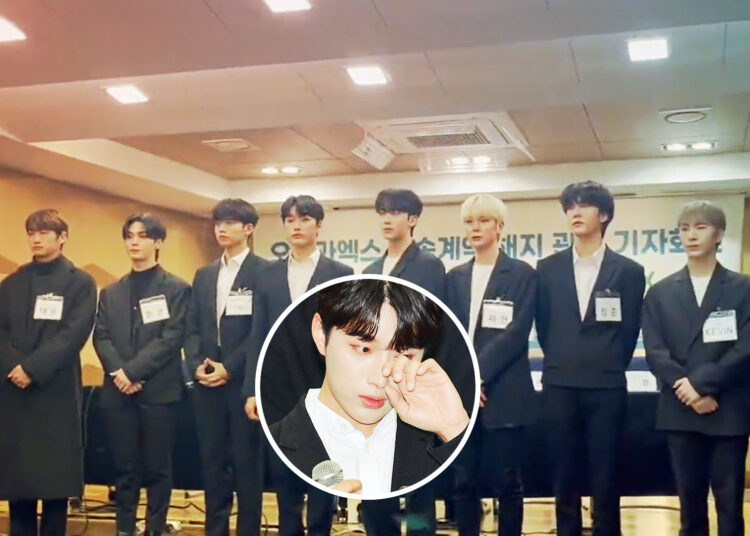 Omega X is again in the highlights for their CEO controversy. Omega X is a South Korean boy band that consists of 11 members. On November 16 a press conference was held at the Seoul Bar Association in Seocho by Omega X in order to talk about the allegations against the CEO.

During the press conference, Omega X talked about various sentimental things. The legal representative of the group announced that the group’s contract with their agency Spire Entertainment is underway for termination.

The group applied for cancellation of their contract with Spire Entertainment. It was also announced that a criminal complaint will be filed against the organization and the former CEO with the intention of ensuring justice and fair compensation.

They will be filing a complaint against the former CEO for his abusive behavior towards the members which will be supported by various pieces of evidence such as photos, videos, and recordings.

According to the lawyer after the assault, the members allegedly received threats and certification of contents demanding payments of 300 to 400 million won per person.

Apart from these, it was also revealed that the above CEO, Chairman Hwang who was aware of the situation, ignored everything. The legal team disclosed their intentions to sue Chairman Hwang and hold him legally accountable for supporting CEO Kang.

Here is what Omega X Shared in the Press Conference.

During the conference, the members of Omega X also shared their individual stories related to it. Jaehan said, “CEO Kang called me after practice ended and made me drink. There was also s*xual harassment involved. He stroked my hand and face.

He also said she would commit suicide, so the members received therapy. We only wanted to be respected as people who love music.” He further added, “It was our second try for everyone, so we didn’t want to waste any time.

We believed that we had to put up with it since our followers were waiting. As the eldest member and leader of the group, looking at our exhausted members, I was very afraid that our dreams would crumble. We resisted and tolerated it, but now we are past the point where we can no longer tolerate it.

We mustered our strength for someone, for everyone who shares our desire.” Another member of the group Sebin revealed, “They said that there would be no next album for them if we refused to attend drinking gatherings.”

Lawyer Seo Joo Yeon also brought up the s*xual harassment the members endured, claiming that during the drinking events they were made to attend, they were stroked on their thighs and faces such that the other person’s breathing could be heard.

They also disclosed that the CEO told them if they want to continue Omega X they better keep crawling. They also talked about the psychological and physical issues that the members have gone through because of CEO Kang.

Hangyeom claimed that he frequently received drunken calls, which made him anxious around noises in his daily life including vibrations, alarms, and bass sounds in music. Hangyeom acknowledged that he was having problems breathing as a result of the difficult circumstances during his private conversation with CEO Kang.

Junghoon said that they have never received any kind of apology from them as of yet. They concluded the conference by thanking their fans who are their strength. They said that all 11 members of the group will not give up, and will continue to make music and performances while greeting fans by showing a good side to them.