Kylie Jenner Appeared at CDFA in a sheer dress but when it comes to BTS then she opted a nude bra! 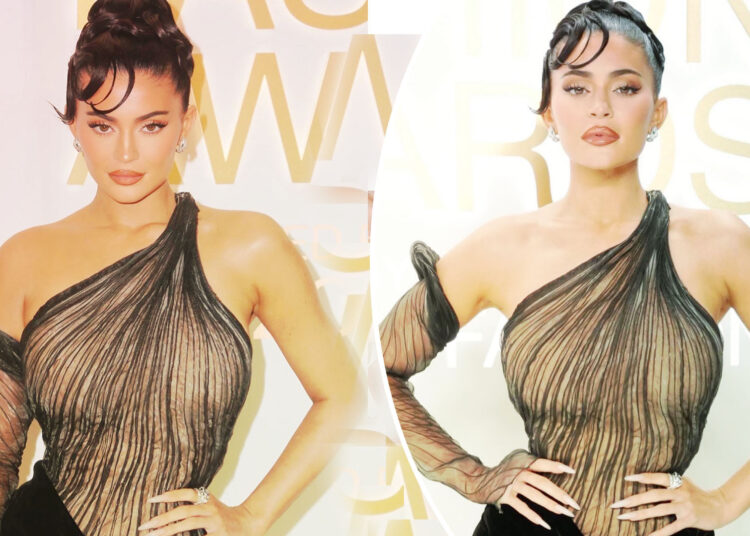 The whole Kardashian Family was spotted at CDFA Awards, however, most of the fans of Kylie Jenner were able to get their eyes off Kylie, as she was look smoking hot.

There are a lot of award functions that are happening right now because the end of the year is almost here. Some are related to films and movies while others are giving appreciation to the fashions and icons.

Talking about the fashions that recently CFDA Awards happened were a lot of celebrities have given appearances.

Among them is Kylie Jenner who appeared in a black sheer dress and later on posted a selfie of herself in a nude bra before dressing up for the award function.

The 25-year-old billionaire Kylie Jenner was recently seen at the fashion awards. But before that Kylie Jenner was seen in a n*de bra which she posted on Instagram. It was on 8 November 2022 when Kylie was seen standing in a doorway while wearing nothing but a nude bra that was matching her underwear.

Here you can check out some posts of Kylie Jenner from the CDFA Awards.

The mother of two was seen forcing appropriately into her hotel room. Her hair was done by the curler while her makeup was on the point. In another pic, she is looking very simple by showing of her glowing skin. There were also several pictures in which she was sitting on the makeup chair and wearing a luxurious robe.

Kylie Jenner has shown these pictures to her 372 million followers which were related to the scene of the award function. As soon as she posted these pictures, a lot of followers and fans came on their way and commented by appreciating her look. Some called her beautiful while others loved her by admiring her look.

Coming to the CFDA Award function then it was not Kylie Jenner but her whole family, except for Kourtney Kardashian, who was present at the function. Among them was Kim Kardashian who was looking mesmerizing in her black dress. Coming to Khloe Kardashian then she was looking like a Barbie doll in a metallic dress.

Kardashian was honored with the same award function for her brand called SKIMS. Coming to Kendall Jenner then she was also looking beautiful as ever in her white gown and perfect makeup.

Coming to the personal life of Kylie Jenner then it is nothing less than a blessing as she is loving her motherhood while enjoying the company of two children. It was in February 2022 when Kylie Jenner welcomed her son into her life his name is yet not revealed.