Jake Bongiovi Revealed His Thoughts On Millie Bobby Brown And Noah Friendship, Thought Them As Lover!

The 20 year old boyfriend of Millie Bobby Brown, Jake Bongiovi recently shared how he felt coming between Noah and his girlfriend! 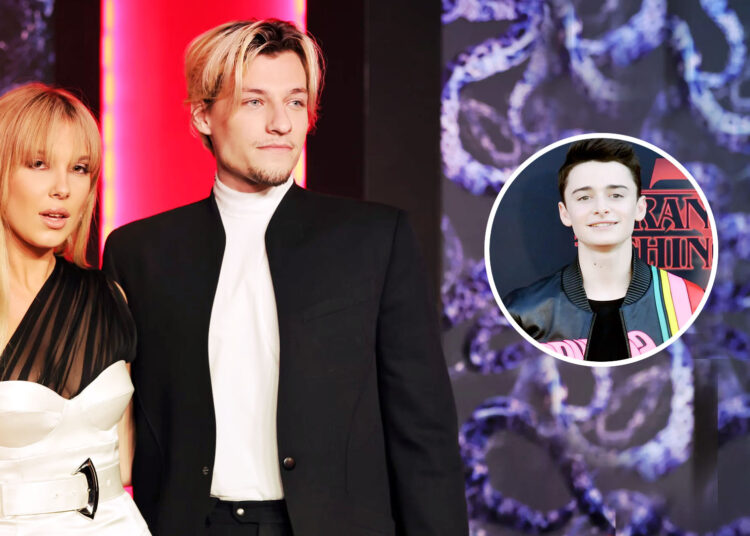 You might remember Millie Bobby Brown from stranger things, if you remember her how can you forget Noah Schnapp? Most of you might have thought in the past that they both were dating each other however it’s not true.

It happens with many celebrities falling in love with their co-stars. Whether it is related to films or series, we have seen most celebrities having a perfect bonding with their reel partner or friend.

Whether it is related to falling in love on the set or behind it, it has become very obvious. Something like this was recently revealed by Jake Bongiovi who said he was aware of Millie Bobby Brown having feelings for her BFF Noah Schnapp and felt he was getting in between.

The 18-year-old famous actress Millie Bobby Brown is right now in love with her 20-year-old boyfriend Jake Bongiovi. But when it comes to her friendship then no one can match it besides Noah of Stranger Things.

Coming Jake Bongiovi then he has already noticed that there is some kind of bonding between them as if they were in love. When Jake Bongiovi first saw them together he thought of nothing but them as a couple. However, later on, he got to know that it is nothing more than a great friendship.

Millie Bobby Brown and Noah grew up together on the set of Stranger Things since 2016. So it is not a single doubt why they have a great connection with each other. The actress once said that they are always able to connect instantly which is very beautiful.

This is not the first time when the actress has mentioned her friendship with her former co-star. She said they would have married each other if they wouldn’t found someone in their life until them turning 40 years old age.

The actress even said that she would not love to have kids as they could not handle them together. Noah responded and said that’s a deal breaker for not having kids.

In addition to their friendship, Millie Bobby Brown has also talked about her relationship with Jake Bongiovi. She accepted her relationship publicly and that’s the reason why uploaded many photos of them together on Instagram.

It was recently when the actress was seen with her boyfriend in Disneyland while they both were seen enjoying the place. The actress was also seen kissing the 20-year-old man and uploading short videos on Instagram.

Coming to the bond between Millie Bobby Brown and Noah then they would again appear in the final season of Stranger Things which is Stranger Things Season 5. The production of the series has just started and we would be able to see more thrill and suspense in the series.