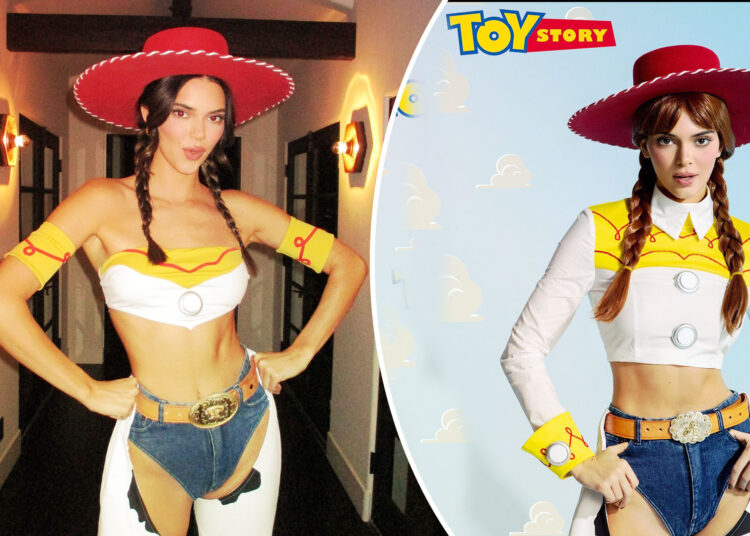 On Saturday, October 29, the supermodel, Kendall Jenner 26 years old, posted a carousel of photographs on Instagram of her Pixar-inspired outfit with the phrase, “Well, aren’t you simply the nicest space toy.”

Jenner’s outfit, which she wore to her Halloween party in Los Angeles, consisted of Jessie’s iconic red wide-brimmed hat and rosy-colored tresses. Jessie inspired Jenner’s costume. The inventor of 818 Tequila then put her mature spin by donning a cropped white blouse and the shortest pair of denim shorts that showed her cheeks.

Kendall Jenner also sported a pair of white sandals. The cow print chaps were the finishing touch that the reality star added to her outfit.

Here you can check out Kendall Jenner’s Halloween Post.

“So wonderful!” Gigi Hadid wrote. A remark was left by Jen Atkin, which said, “the prettiest little cowgirl I adore uuuu.”

The Hulu star’s older sister, Khloé Kardashian, also praised her appearance on Instagram, saying, “Aw my baby” in the caption.

Given the catwalk star’s affinity for the Western aesthetic, her vacation getup was particularly well-suited to the occasion. When the entrepreneur was on vacation in Wyoming in August, she had a cowboy boot tattoo near her ankle.

Jenner captioned a photo of the tattoo created by Kate McDuffie with the words “When at the rodeo.” The photograph was black and white. McDuffie’s official Instagram account for her tattoo shop shared the following comment about the artwork: “Teeniest cowgirl boot for Kendall.”

In Wyoming, the star of Keeping Up with the Kardashians was accompanied by her boyfriend, Devin Booker. During that period, Jenner uploaded a cute snapshot to her Instagram Story in which she and the Suns player can be seen cuddling up together on the porch of a cottage.

The former Keeping Up With the Kardashians cast member and her boyfriend, Booker, seemed relaxed as they made the most of their time at the rustic retreat, which had a lake view.

Jenner wished the athlete a happy 26th birthday on Instagram Stories on Sunday, October 31, saying “Birthday boy” along with a red heart emoji. The day marked the athlete’s actual birthday.

After making their romance Instagram public in February 2021, Jenner and Booker took a break in June after attending sister Kourtney Kardashian’s wedding in Italy. After that, they were seen together quite a few times throughout July, which sparked suspicions of a reconciliation.

In August, a source close to the couple informed Us Weekly that Kendall and Devin were officially back together again. “Despite having spent some time away, they have reconciled their differences and are extremely content in one other’s company.”