Hailey Bieber and Kylie Jenner Are Painting Their Bodies Green for the Spooky Season.

Hailey Bieber and Kylie Jenner shared their spooky pizza night adventure and their Halloween excitement on social media. With Halloween just around the corner, it only makes sense that the two best friends can't wait to show everyone the fantastic collection of costumes they have in store. 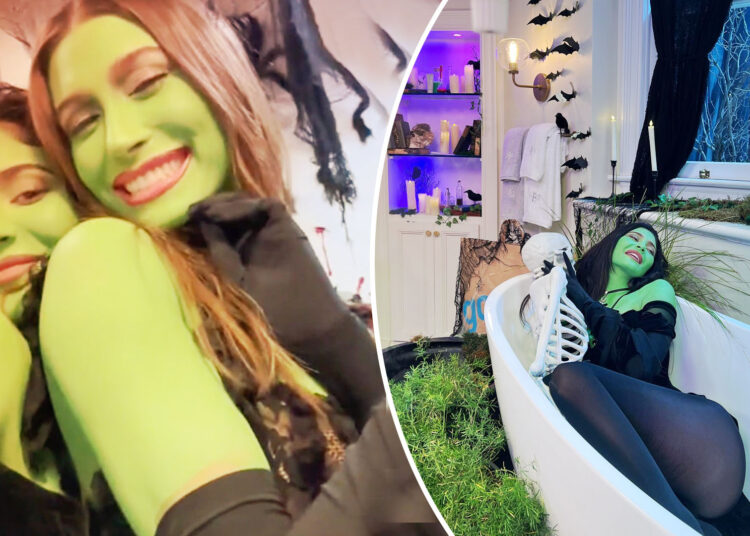 Hailey Bieber and Kylie Jenner two appeared in sleeveless black dresses and long black gloves their skin was painted green. The color green could represent different characters, but the overall witchy aesthetic brought them to life. They both look like they’re having an “evil” good time.

Hailey Bieber posted a picture of Kylie posing in a bathtub on Instagram on October 13. Jenner gave off a strikingly evil aura with her green makeup on top of her tight black dress, gloves, and necklace. The founder of Kylie Skin saw the mannequin snuggling up to her.

While we can only speculate what they were thinking when they came up with this collaboration, we believe it’s a phenomenon. The mother of two is surrounded by various spooky decorations in the bathroom set. Numerous lighted candles, lit bats, moss on the windowsill and even floating candles all add to the eerie atmosphere.

Also Read: Sofia Vergara Works Up On Her Curvy Body

Here you can check out the post by Hailey Bieber.

They decided to take the spooky adventure outside, so it didn’t seem like it ended in the bathroom. However, the beauty mogul posted a video of the trip on TikTok. Kylie could be heard saying, “My friends took me out for pizza,” as the video began, but the Rhode founder entered the scene first when Jenner got out of the car.

As they walked down the street, she cheekily asked, “Why is everyone staring at us?

Bieber replied, “I don’t know because I feel like we’re dressed so normally.”

The mother of two, Kylie agreed as Hailey Bieber continued: “So it doesn’t make sense.”

The camera caught a glimpse of a man dressed as a construction worker as they entered the restaurant, suggesting that Justin was with them, as Kylie’s caption suggests.

As Kylie’s mother, Kris Jenner, commented on Hailey’s post, it’s not just fans of the beauty moguls who are crazy about their looks. She wasn’t the only family member to have something to say about the pic, Khloe also added her comment: “Wtf is going on?

They just started the trend of the best Halloween season and we are holding onto all the gorgeous outfits we can see. Other celebrities such as Ashley Graham also offered their opinions on the shoot.

Kylie announced that the collaborative Batman collection, which includes an eyeshadow palette, an eyeliner set, two lip glosses, a matte lipstick, and a brightening highlighter, will launch on October 19 to show how passionate she is about Halloween.

It’s safe to say that Kylie is the queen of Halloween, as she has a long tradition of releasing Halloween-themed makeup products. For more updates stay tuned with Daily Research Plot.